What am I doing incorrectly with this IR/ Mass spec data? [closed]

Ask Question
Asked 1 year, 10 months ago
Active 11 months ago
Viewed 107 times
0
$\begingroup$
Closed. This question is off-topic. It is not currently accepting answers.

Hello, I am trying to determine the chemical formula for the following compound. From the IR spec, I see there is a carbonyl present. Moving on to the mass spec, I see an M+ peak of 142, with what appears to be no Cl/Br present.

I feel I am doing something wrong and any help would be greatly appreciated, thank you!

What I was trying to say was that firstly the molecular formula has to be determined correctly. From the mass spectrum of the given molecule, the molecular ion peak ($\ce{M+}$) was determined as $\frac{m}{z}=142$, which corresponds to the molecular formula $\ce{C9H18O}$. Note that, it can also correspond to $\ce{C10H6O}$, but in your $^1\mathrm H$ NMR spectra, a total integration of at least $9$ is there, thus the latter consideration is anyway not possible to be the correct formula.

After determining the chemical formula, it's good to look for index of hydrogen deficiency(i.e. degree of unsaturation) of the molecule. If the formula is $\ce{C9H18O}$, the degree of unsaturation is $1$. From the IR spectra also, we can see a sharp distinct $\ce{C=O}$ stretch near $1700\ \mathrm{cm^{-1}}$, and also no aldehydic proton peak near $9.5{-}10\ \mathrm{ppm}$, therefore we can conclude there is a keto group present in the molecule.

Now, we come to analyse the $^1\mathrm H$ NMR spectrum, which shows only total relative integral of $9$, but remember the integrals in proton NMR are always relative, they are never absolute. So, you can scale them up or down relative to your choice. Here to match the total protons in our system, we have to scale it up by a factor of $2$. Therefore the integrals now correspond to $4,8$ and $6$ protons respectively, and also by this scaling we can also say that the molecule is symmetric in nature. 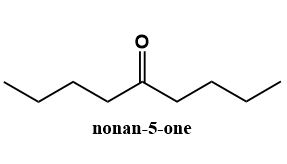 Analysis of the splitting pattern to find out the $^3J$ values, I leave it to you...

A more by the numbers approach is this. Gather some evidence before speculating about the molecular formula.

Do a first pass to see what "jumps out" of each of the spectra.

From the IR spectra:

From the Mass spectra:

From the NMR spectra:

Now guess about a molecular formula

Now there is enough evidence to speculate an alkane with a ketone group.

Guess a formula, see how the pieces fit with a further analysis of IR, NMR and mass spec data.

It's an iterative process...

Not the answer you're looking for? Browse other questions tagged nmr-spectroscopy mass-spectrometry ir-spectroscopy or ask your own question.