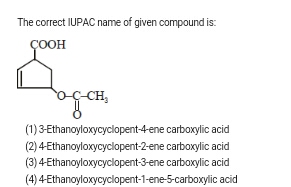 I strongly feel that the answer should be option (1) as the ester functional group has a greater preference over the double bond and hence it should get a lower locant. But the source of the question says that the answer is option (2). My question is why the double bond gets a lower locant than ester in this case? As far as I know the lowest set out locants rule is applicable for substituents but when the comparison is between functional groups the preference order plays a greater role. Please let me know if I am wrong.

The principal characteristic group is the carboxylic acid. Therefore, the lowest locant is assigned to the $\ce{-COOH}$ group in accordance with Rule (c).

Next, a low locant is assgined to the double bond according to Rule (e). Therefore, the name of the structure without any further substituents is cyclopent-2-ene-1-carboxylic acid.

Finally, a low locant is assgined to the remaining substituent to Rule (f).

8
"Tie-breaker" rules for IUPAC nomenclature of organic compounds
6
Why are enynes named as -en-yne and not -yn-ene?
1
Order of priority for including functional groups in the parent chain compared to order of priority for numbering the parent chain
2
Assigning locants when both unsaturation and substituents are present in a hydrocarbon
4
Naming tetrahalogenated benzene
1
Confusion in the name of this organic compound
0
IUPAC nomenclature of cycloalkadienes with substituents and alkenes on the same carbons