If anyone could give me a push in the right direction or can confirm if the reactions in the picture are correct, I'd appreciate it very much. Thanks in advance!

I'm not familiar with selenium chemistry but am trying to help with the oxidation reaction of selenourea with hydrogen peroxide part. Here what I found on that reaction in literature (Ref.1):

Abstract: Reactions of biological oxidizing agents, such as hydroxyl radicals ($\ce{^•OH}$), singlet oxygen ($\ce{^1O2}$), hydrogen peroxide ($\ce{H2O2}$), and peroxynitrite ($\ce{ONOO-}$) with selenourea were studied. The kinetics of the reactions was followed using time-resolved techniques, and the bimolecular rate constants were determined. In all these reactions, under aerated conditions, elemental red selenium was produced as one of the reaction products. The average size of the selenium particles could be controlled and stabilized in the range of $\pu{20−100 nm}$ with the addition of bovine serum albumin (BSA) or sodium dodecyl sulfate (SDS). The particles were characterized by dynamic light scattering studies (DLS), which revealed that the size and distribution of the particles depended mainly on the amount of selenourea undergoing oxidation. Other factors such as the nature of the oxidant and the concentration of the stabilizer also are important in stabilizing the particles. Nanoselenium-reduced $\ce{ABTS^{•-}}$ to colorless $\ce{ABTS^2-}$ ($\ce{ABTS} =$ 2,2‘-azinobis(3-ethylbenzothiazoline-6-sulfonate) and oxidized dichlorodihydrofluoresecein diacetate (DCFA) to fluorescent dichlorofluorescein (DCF) indicating its ability to participate in redox and free radical reactions. The reactivity of selenium nanoparticles with these systems varied linearly with the surface area of the particles. The studies demonstrate that selenourea undergoes oxidation with both one-electron and two-electron oxidants to produce elemental selenium, which, on stabilization to nanometer size, exhibits size-dependent redox activity.

The reaction mechanism is depicted in following Scheme, which is directly from Ref.1: 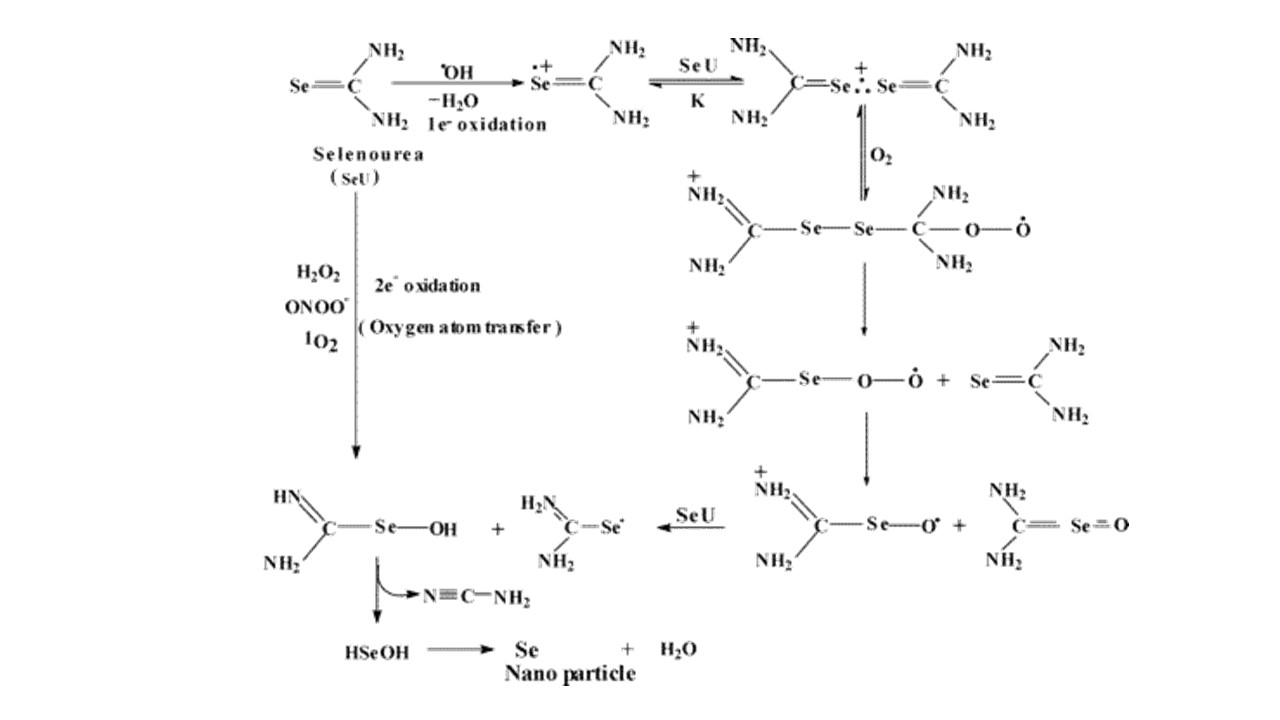