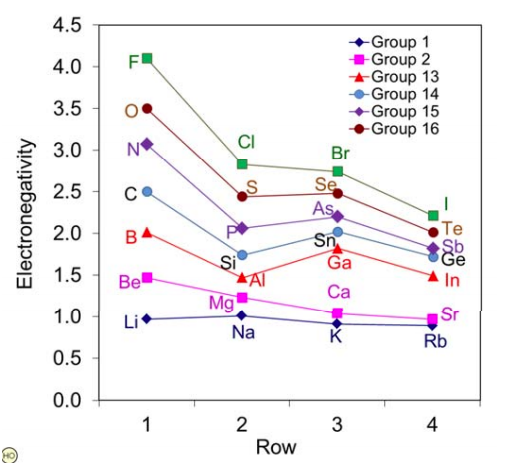 In general, going down a group Zeff initially increases but then becomes approximately constant, while electrons are in higher n orbitals, hence valence electrons on average further from nucleus, thereby size of atom increases, and electronegativity decreases. An exception is present in groups 13-16, going from row 2 to 3, where atoms of elements in row 3 have greater electronegativity than atoms of elements in row 2. This is because the row 3 element follows the d-block, where 10 extra electrons have been added in the next n down, so don't fully shield the valence electrons from the nuclear charge. That's a lot of electrons not doing much shielding, yet the nuclear charge has increased by +10 with 10 extra protons. Accordingly Zeff increases from row 2 to 3 more than expected, so electronegativity increases.

Why then, by the time you get to group 17, does this trend no longer hold i.e. electronegativity decreases from Cl to Br (see graph above)?

This can be simply explained by the electronic configuration. The electronic configuration of bromine is $ 1s^2 2s^2 2p^6 3s^2 3p^6 4s^2 3d^{10} 4p^5 $ Thus we can see it has 5 electrons in the 4p subshell which provides shielding effect so it's electronegativity is less than that of chlorine . It has also decreased due to the increase in size from chlorine to bromine.

Electronegativity is a measure of an element's ability to attract electrons in a covalent bond. According to periodic trends, it increase up a group and across a period (from left to right).(1) So in theory, the electronegativity values should decrease from Si to Ge (although Ge is not shown in your graph) or from Al to Ga, but this is not the case. Why is this not the case? Well, as you said, it has something to do with the d-block. To be more concise, it is due d-block contraction, which, in our case, refers to the "unexpectedly small increase (or even decrease) in atomic/ionic radius when moving down a group". (2)(3) For example Al and Ga, who have atomic radii of 184 pm and 187 pm respectively.(4) One would expect this increase in radius to be much larger as Gallium occupies an additional energy level. However, Ga's electron configuration is [Ar] 3d10 4s2 4p1. As one can see, it has the 3d orbitals occupied with electrons– these electrons are ineffective at shielding . Hence, the valence electrons of Ga experience a stronger attractive force from their nucleus. Consequently, Ga has a smaller atomic radius than expected and as this is the case, its electronegativity increases as well as a result of the nucleus having a stronger attraction for electrons than if it would have a larger atomic radius.

All in all, these inconsistencies in periodic trends for electronegativity can be attributed to the d-orbitals' electrons being ineffective at shielding, resulting in a stronger attractive force from a nucleus than expected. Thus, I think your question could be reformulated to why is there this disruption in electronegativity trends instead of why group 17 does not follow these trends– although in the end, these questions will result in the same answer.

Note: I recommend going through the references I have listed below to gain a better idea of what is being discussed.

3
Which of the following statements is true about the trend down group 7?
1
Periodic Trends of Zeff and Electronegativity
5
Variation in atomic sizes in the transition elements
3
How well do d-block electrons actually shield?
6
Boiling point trend in group 13
3
How can an electron shield another electron of the same subshell?
0
Why does the emission wavelength of sodium appear to be an exception despite the trend for ionisation enthalpies among alkali metals?