Synthetic steps for the interconversion between aldehydes and ketones

I am learning about carbonyl chemistry at the moment. So far, we have been able to make aldehydes and ketones from alcohols (via oxidizing agents). I can't help but wonder if there is possibly any way to make aldehydes from ketones or vice-versa through a series of synthetic steps. I would appreciate it if the synthetic steps are in the level of an undergraduate organic chemistry course.

Question: Synthetic steps for the interconversion between aldehydes and ketones?

You can easily convert aldehydes to ketones and vice-versa by using simple organic synthetic steps which are very much well known.

For converting aldehydes to ketones there are numerous pathways. Here I am mentioning the simplest two ways, one of which is by using Grignard reagent and other by using thioacetal intermediates.

You can react aldehydes with Grignard reagents ($\ce{R^2 -MgBr}$) and perform acidic workup to generate secondary alcohols. Then you can oxidise the alcohol to get a ketone by commonly used oxidising agents like PCC (pyridinium chlorochromate).

The other way is to react the aldehyde with a propane-1,3-dithiol to generate a cyclic thioacetal . Now, interestingly, the proton attached to the carbon now can be removed by strong base like n-Butyllithium, and generate Carbanion which can perform a $S_N2 $ reaction with an alkyl halide to generate cyclic thioketal. After that the thioketal can be hydrolysed using $\ce{HgCl2/CdCO3/H2O}$ to generate your desired ketone. 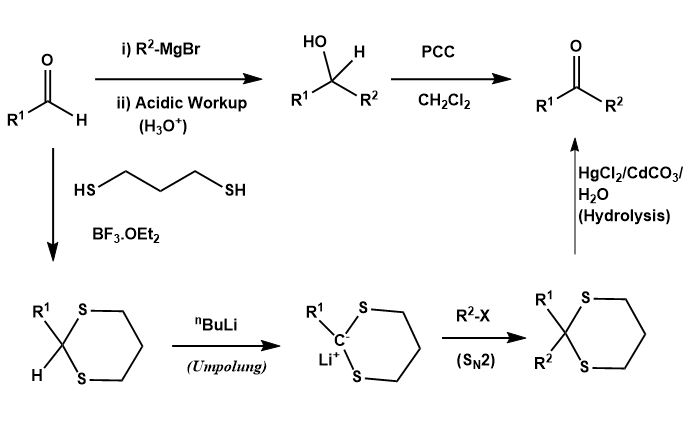 The easiest step for this conversion is to perform a Bayer-Villiger Oxidation reaction on the ketone to get an ester. Then that ester can be reduced by Diisobutylaluminium Hydride (DIBAL-H) and an aqueous workup will generate desired aldehyde (along with an alcohol). (If you wish you can further oxidise that alcohol also in case you want aldehyde of that part). 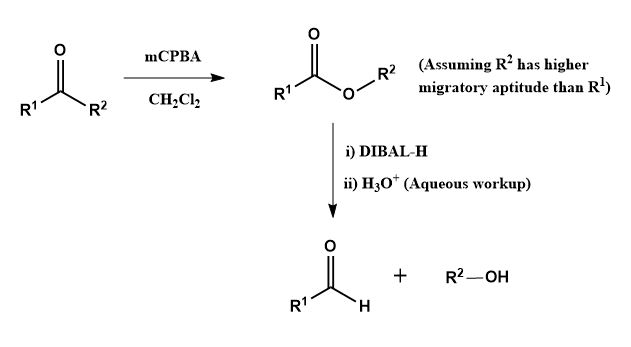 Enzymatic conversion from aldehyde to ketone and back is common in the biochemistry of carbohydrates. In glycolysis, for example, phosphorylated dihydroxyacetone is converted to glyceraldehyde. Sugars have a hydroxyl group alpha to the carbonyl group. In the enzymatic reaction, isomerization proceeds via an enediol intermediate (source):

A similar acid/base mechanism is used in the interconversion of glucose to fructose. This is a commercially relevant reaction for making high fructose corn syrup.

Turn a primary carbon into a secondary carbon and vice versa