LDA and an aldehyde

Compounds A and B both react with LDA (lithium diisopropylamide, a strong base) to form the same anion C with the formula $\ce{C4H5O^-Li^+}$. 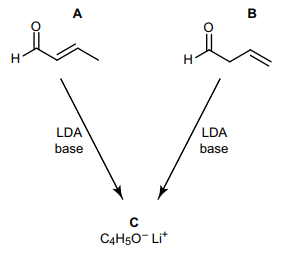 I am unfamiliar with LDA. My first thought was that the base would attack the H of the carbonyl C, I presumed that this H would have the lowest $\mathrm{p}K_\mathrm{a}$ because it is an $\mathrm{sp^2}$ C and the C is slightly positive from the carbonyl.

However, the structures this gave were confusing and didn't give the same product for both A and B. I tried to google LDA which showed that it was a big bulky base so it can't attack hindered H, but this shouldn't be a problem as the carbonyl C H isn't hindered. However, I found one mechanism for a different aldehyde that had the H taken from the $\mathrm{sp^3}$ C next to the carbonyl.

Where would LDA preferentially attack an aldehyde and why?

Additional note: I have now played around with the structures to find that the only way LDA could react with A and B to form the same anion C if it in both cases it removes and $\ce{H+}$ from the $\mathrm{sp^3}$ carbon in the structure, these seems counter-intuitive! But perhaps LDA only attacks $\mathrm{sp^3}$ C-H for some reason?

If electronegativity alone were the only factor in determining the acidity of a carbon-hydrogen bond, the base would in fact attack the aldehyde hydrogen. But that is not so, for delocalization of negative charge can also stabilize the anion. If the base attacks at the initially saturated carbon in either compound, you get a delocalized negative charge distributed throughout the carbon chain and onto the oxygen.

Such delocalization stabilizes the anion so strongly that it overrides the original electronegativity difference between $\mathrm{sp^2}$ and $\mathrm{sp^3}$ carbon atoms. So, the base will attack along the carbon chain to produce this delocalized charge anion, instead of at the carbonyl carbon which offers no such delocalization.

0
Can a base like OH- attack aldehyde and ketone to create hydrate instead of enol?
1
Base used in Claisen Condensation
4
Salt used in Perkin Reaction
2
When will acid-base reactions occur before substitution reaction
2
How to achieve regioselective (base-catalyzed) enolization of a carbonyl group in a diketone?
2
Reaction of cyclohexene oxide with LDA
8
Nucleophilicity of sterically hindered enolates