In the benzenediazonium $\ce{C6H5N2+}$ the nitrogen contributes its lone pair to the carbon in benzene. So where is one electron of that carbon, since it is not used for bonding with nitrogen where has one of the electron of carbon gone?

If the diazonium ion were formed in the way you described, it would be formed by N2 acting as a nucleophile and attacking the ring with a lone pair, displacing a leaving group - a nucleophilic aromatic substituion. In this case, the "one electron of carbon" would have left with the leaving group that was on the ring before. The carbon would now be neutral as it had lost an electron and essentially gained one from the dative bond from the N.

However, this isn't the usual way to form a diazonium ion. In fact, we normally start with a primary aromatic amine, and react it with a diazotizing mixture of NaNO2 and HCl. In this case, the positive charge on the N ends up, not from the N forming a dative bond whilst acting as a nucleophile towards the ring but in the final elimination of water to form the triple bond in the diazonium ion: 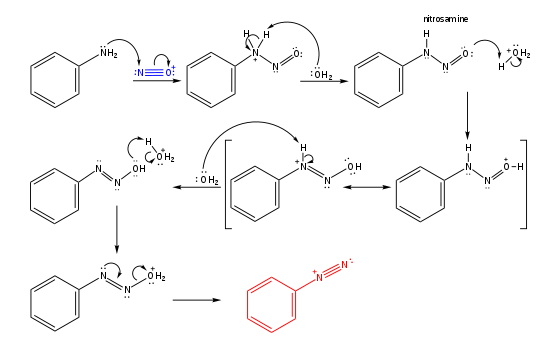 4
What is the correct lewis structure of SCH⁻?
3
Proper Resonance Structures
5
The Lewis structure for NCO-
7
Which rings of this heterocyclic compound are aromatic?
1
Can this sp2 lone pair resonate?
5
Why benzenediazonium bromide and iodide are not important?
0
Comparison of basicity of o-phenanthroline and ammonia