I am a high school student and my professor mentioned that the Gibbs free energy is the maximum amount of work (or useful work) that a system can do, whereas entropy is a measure of the non-available enthalpy.

I am not able to understand this and it would be helpful if you could explain this or link to some resources that could explain this at a high school level (I know some multivariable calculus, but not that comfortable with it) as I have difficulty finding them.

Also, we used the fact that Gibbs free energy is the maximum amount of work to derive the equation $∆G = -nFE$ and then proceeded to derive the Nernst equation.

What happens to the energy leaving a system?

When a process brings the system from a higher to a lower energy, the energy leaves the system in the form of work done on the surroundings or heat transferred to the surroundings (1st law of thermodynamics). For a given set of initial and final states, the amounts of work and heat can vary, but the sum has to be the same. For example, if our system is a charged battery, we can either run a motor with it, lifting up a rock (work done on the surrounding). Or we can short the battery, creating thermal energy that is transferred to the surrounding in the form of heat. We can even have a situation where heat and work have opposite signs (e.g. do more work and have heat transferred into the system to get the same energy balance).

How is heat and work related to entropy changes?

Can I see a picture?

The picture also indirectly shows the entropy (via the arrows labeled heat and $-T \Delta S$. If the arrow for $-T \Delta S$ is downwards, entropy in the system increases (scenarios labeled "more dispersed"). If the arrow for heat is downwards, entropy in the surrounding increases. To calculate the actual entropy, you would have to divide by the temperature, but the way it is shown everything can go into a single picture. 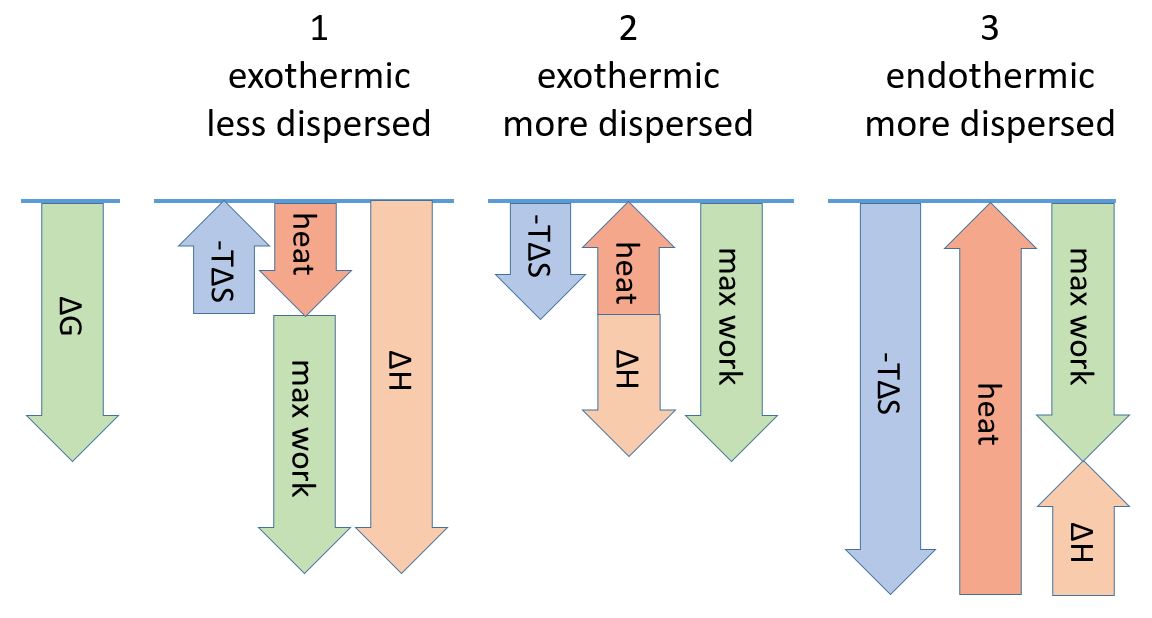 I have three scenarios, depending on whether the process is exothermic or endothermic and whether the entropy in the system increases or decreases. One scenario (endothermic reaction with a decrease of the system's entropy) is not shown (you would have to do work on the system to drive such a process, and we are trying to make the process do work for us instead).

In scenario 2, the process is also exothermic, but different from scenario 1 the entropy of the system increases in this scenario. The work done by the system is (surprisingly, perhaps) larger than the enthalpy change, and the extra energy comes from heat transfer from the surroundings.

In scenario 3, the process is endothermic. You might think that this process can't do any work because - where would the energy come from? It comes from the surrounding, partially to provide the energy for the endothermic process and partially to be transferred back into the surrounding in the form of work. This can happen because just as in scenario 2, the entropy of the system increases.

[...]the Gibbs free energy is the maximum amount of work (or useful work) that a system can do, whereas entropy is a measure of the non-available enthalpy.

This sort of describes scenario 1, which I pasted again below with two boxes for emphasis. 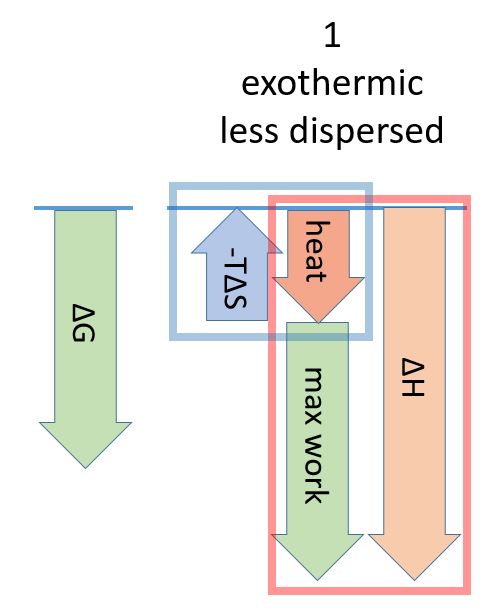 This is all rather complex and might make you dizzy. The Gibbs energy helps us to summarize all this in a single quantity. It combines entropy and enthalpy changes in the system in a neat way that tells us about the maximum work. In the absence of work, it also tells whether the process will happen in that direction or not.

Disclaimer for those that have a physical chemistry background

5
Does entropy contribute work?
5
Why does the Gibbs Free Energy change determine spontaneity of a reaction?
5
Gibbs Free Energy
3
Gibbs energy: the term −TdS. Where does the reversible heat go?
2
Entropy Changes in Electrolytic/Galvanic Cell?
1
Heat and work of glucose combustion
0
What is 'non-expansion work' and how does ΔG represent the maximum non-expansion work that can be extracted in a reversible process?