Why doesn't water play a role in reactions in aqueous reactions?

In the above reaction both the substances are in water, however water plays no role in the reaction. Why is it that although water is present in the reaction, it does not play a reactant role? To clarify, why isn't the above written as:

Why does water act as a bystander and not a reactant?

Water is far from a bystander in aqueous solutions. It has a number of features that greatly facilitate chemical reactions, as well as being an important ligand (the aqua ligand) of transition metal complexes.

Here are some (unbalanced) examples: 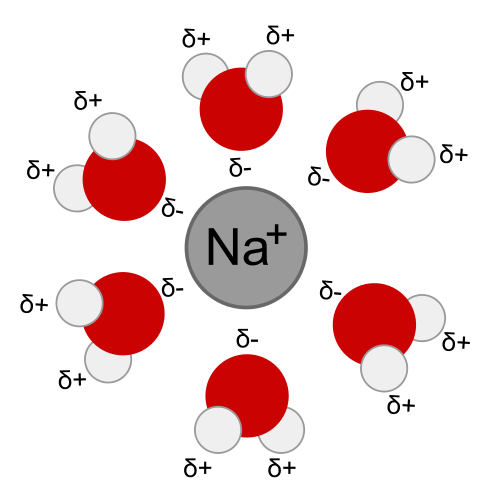 It does play a role--it's all hidden in the $_\ce{(aq)}$. Whenever an ionic compound is dropped in water, it dissociates into the ions. This dissociation is facilitated by the water, as it solvates the ions.

What happens is that a certain amount of energy is required to dissociate an ionic compound (lattice energy). If a pure compound was dissociated, there would be quite a bit of energy required to do this, and you would end up with something unstable (the molecule would probably just recombine.)

Now, water, being polar, solvates the ions. What happens is that water molecules aggregate around the ion, and the net charge gets effectively dispersed. This leads to a gain in stability (and a decrease in potential energy known as the "hydration energy"). Ionic compounds with enough hydration energy (specifically, when the absolute value of hydration energy>lattice energy) are said to be "soluble", and dissociate readily in water.

So the actual reaction is:

Where the $\ce{_{(aq)}}$ signifies solvation. There will be a similar one for barium nitrate.

Now, what happens is that the barium and carbonate ions react to form insoluble barium carbonate. This precipitates out, and we get the following reaction:

Water isn't reacting here, it is more of a catalyst. Without it, the reaction wouldn't occur (unless you melt the compounds--molten ionic compounds behave similar to their aqueous counterparts).

-4
What makes a molecule a polyatomic ion?

6
Water reacts or doesn't react?
0
What determines whether a double displacement reaction will occur?
2
How to predict precipitate upon evaporation from calcium ions and either chloride, carbonate, or nitrate counterions?
0
Autoprotolysis Constant of Water
9
Why does Devarda's alloy include copper?
4
Is water acidic enough for an redox reaction involving H+?
2
What are the reactions occurring during the titration of a carbon dioxide contaminated water sample with diluted sodium hydroxide solution?
5
Reaction of Halogens with water
2
Can acid-base reactions occur in a non-aqueous medium?