When a candle burns, why does the top of wick glow if bottom of flame is hottest?

Is the reason for this that the concentration of liquid wax is greater at the bottom, offsetting the greater temperature at the bottom? 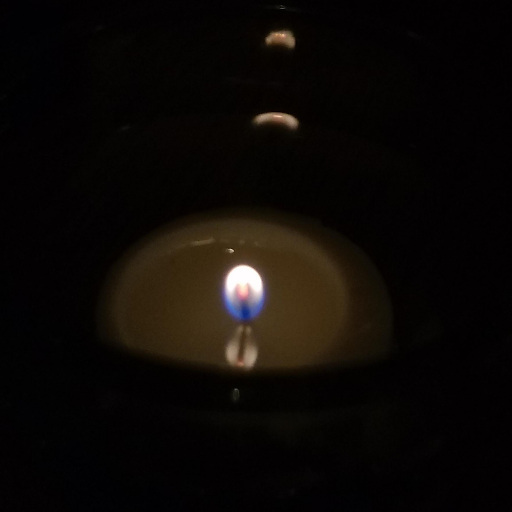 For a candle, the wick burning isn't the intended purpose of the wick; light comes from burning wax (more generally: fuel), you want to burn the wax not the wick. Rather the purpose of a wick is to help fuel evaporate by soaking up wax and allowing the radiant energy from the flame to heat the wax causing it to evaporate and burn also.

As wax travels up the wick, it evaporates and less wax is in the wick the further up you go. Eventually the wax dries up and the radiant energy is heating a wick without any wax. Eventually the wick gets so hot at the tip, that it will glow due to black-body radiation.

In summary: though the blue is the hottest part of the flame, the wick can evaporate wax to cool towards the bottom. There is no wax at the top and thus as the radiant energy of the flame causes it to get hotter until it starts to glow.

Extra: I will note that the top of the wick does not burn when lit as the gas around the wick has too little oxygen to burn (unless the wick slumps out side the flame). When you blow out the candle the low oxygen environment of a flame is gone and thus the hot wick will smoulder.

Because fire is not the same thing as light.

Michael Faraday did a wonderful job of explaining how the candle works, and I direct you to look at it (there are also Youtube videos giving a modern take on this work) if you're interested.

If you take a flame where the fuel is very well-mixed with oxygen and the flame that's produced is not sooty, it does not glow like a candle even though it's very hot. This is precisely why Bunsen burners are used in a laboratory. They give a hot but non-illuminating flame that's great for doing analysis.

Not the answer you're looking for? Browse other questions tagged thermodynamics heat combustion light or ask your own question.

14
Can flames be colored black?

5
Paper Towel Soaked with Isopropanol/Water Mixture Burns without Damaging the Paper. Why?
1
Spectrometry in Chemistry & Flame Test Lab
12
Why is the outermost part of the Bunsen burner flame not the hottest region?
9
Why does lead nitrate powder on heating starts turning yellow from the top rather than from the bottom?
6
Why might copper have a lower heat capacity than lithium according to the Shomate Equation?
3
Why does the solubility of LiCl increase with temperature if the dissolution is exothermic?
6
Why do different substances containing saturated hydrocarbons burns with different flame?
15
What is the difference between "vapour" and "gas"?
1
Does the vapor pressure of a substance depend on the presence of other gases?