Their answer is that water contracts as you heat it in this regime, thus (at constant $p$) the surroundings are doing work on the system, hence $C_{\mathrm m,p}\lt C_{\mathrm m,V}$.

But the textbook also contains the following equation (which is correct, and whose only restrictions are that the system is of fixed phase and composition, and $\text{đ}w = –pdV$, i.e., pV-work only):

where $\beta$ is the isobaric thermal expansivity, and $\kappa$ is the isothermal compressibility.

So is the statement in the textbook's question just a flat-out mistake, or am I missing something here?

It appears their error is in assuming the difference between Cp and Cv is due to pV expansion alone, when in fact there are two terms:

where the first term on the RHS is the PV work per unit change in T, while the second term is the change in internal energy with respect to volume (which results from changing the intermolecular distance between interacting particles) times the rate at which the volume changes with temperature.

because the change in the density or molar volume with $T$ (and therefore also the thermal expansion coefficient $\beta$ - usually designated with the symbol $\alpha$) becomes zero, that is there is a (well known) minimum in the dependence of the density or molar volume on $T$ at constant $P$, illustrated in the following figure (source: wikipedia) 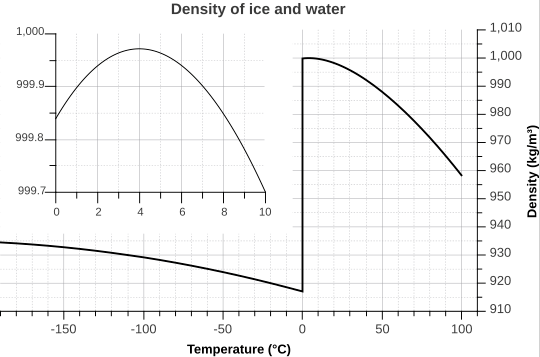 In agreement with this, if you inspect available heat capacity data you will see that the isochoric and isobaric heat capacities converge as the temperature of liquid water nears $\pu{0 °C}$.

The International Association for the Properties of Water and Steam has released a document (IAPWS R7-97(2012)) containing expressions for the heat capacities of water parameterized based on experimental data (see Table 3).

The textbook's question is flawed because, as you state, its assertion that $c_p < c_v$ is false.

The textbook's answer messes up the math a little bit. Their logic is based on the First Law:

Original take-down of the textbook answer:

Based on your summary, the textbook's answer fails to account for the fact that switching from an isobaric path to an isothermal path changes the end state. The (flawed) logic seems to be: "if I go from A to B isochorically then I need to provide some amount of heat, but if I go from A to B isobarically then the surroundings provide some work so I don't need to provide as much heat." The flaw is that if A-B is an isochor then an isobar beginning at A doesn't go through B. An apples-to-oranges comparison would consider the heat required to reach a third point C which is at the same pressure as A and temperature as B, and would find that this heat is never lower than that required to reach B.

Not the answer you're looking for? Browse other questions tagged thermodynamics water or ask your own question.

8
Why is it necessary to consider infinitesimal changes in p,V,T for H,U and G given that they're state functions?
7
How to find and use the Clausius-Clapeyron equation
1
Expression for fugacity coefficient derived from a pressure-explicite EOS
2
Proving a relation for fugacity of component i in term of independent variables (T,V)
1
What is the entalphy change with respect to pressure at Isothermal Process for *Real Gases*?
2
Van 't Hoff equation