Why is there a lone pair in thionyl fluoride?

Why is there a lone pair in $\ce{SOF2}$? I drew its structure, which according to me should look like this: 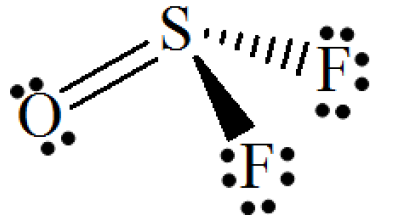 Why is there a lone pair on sulfur? Isn't its octet complete? If yes, why should it expand its octet and gain more electrons?

When you want to write a Lewis structure, I suggest you start from considering how many valence electrons each atom has. In your case, you would have:

The final total would be 14 + 6 + 6 = 26. The structure you guessed for is correct, sulfur is the central atom. You start by drawing a single bond per each atom, getting something like this:

Then, you can draw a double bond for oxygen:

This makes sense because sulfur is in period 3, so it is possible for it to have more than 8 electrons: in other words, the octet rule applies not only for 8 electrons, if that makes sense.

0
why do we call lone *pairs*?
3
Sulfurous acid tautomerisation
0
How do lone electrons impact the charge of an ion?
2
Is the VSEPR theory correct in determining the bond angle of sulfur dioxide?