While reading the preparation of phenol from cumene by reaction with $\ce{H2O2}$ or partial oxidation, I was curious to find out why toluene wasn't used.

I checked the literature and found that benzaldehyde would be formed in the case of toluene [1, 2].

You can justify the formation of Benzaldehyde from Toluene by oxidising with peroxide just by looking at the mechanism of the reaction and think of migratory aptitude of Phenyl group , hydride and methyl group.

Firstly, if we delve into the mechanism of the oxidation of Cumene, we'll find that there is a rearrangement step in the mechanism. The rearrangement occurs when one of the oxygen in hydroperoxide gets protonated and leaves as water. If you now think carefully, there are both the possibilities of migration of Phenyl and methyl group to the oxygen. But Phenyl has certainly more migratory aptitude than methyl, and also the carbocation formed after the rearrangement is stable, as it has two methyl group on the $\alpha$-position to stabilise by electron release and one oxygen atom to stabilise it via donation of lone pair. Thus the migratory aptitude and stability of the carbocation formed both drive the rearrangement to prefer the phenyl migration. Therfore acetophenone is not formed due to unfavoured methyl migration. 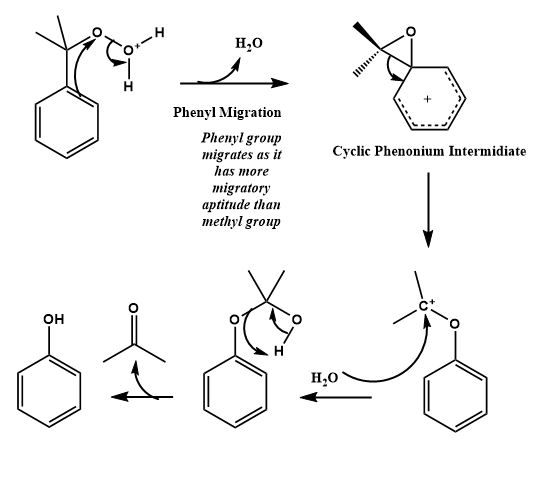 On the other hand, the situation with toluene is slightly different. Here you have both the possibilities of hydride as well as phenyl migration. But hydride has almost similar (slightly more) migratory aptitude as Phenyl group, and what is more interesting is that the migration of hydride will lead to more stable benzylic carbocation, which is not possible by phenyl migration. These two effects cooperatively facilitate the hydride migration and therefore leading to the product Benzaldehyde. 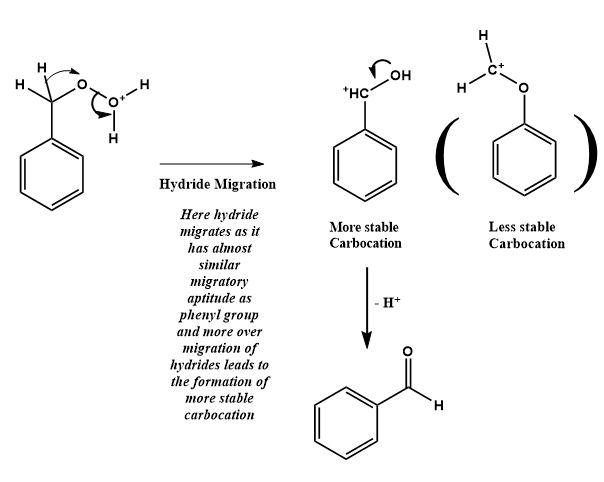 Thus the migratory aptitude and stability of the carbocation are the two effects which create the differences in the product formation in case of oxidation of Cumene and Toluene.

Not the answer you're looking for? Browse other questions tagged organic-chemistry aromatic-compounds phenols organic-oxidation or ask your own question.

8
Mechanism of toluene oxidation with CrO3
0
Obtaining Benzene from toluene
1
Find product of the oxidation of 2-methylnaphthalene with chromium trioxide
2
Reactivity comparison of phenol and toluene towards electrophilic substitution
0
Oxidation of 2-Methyl, 2-Phenyl Propane