Confused between structural isomers versus stereoisomerism

So this question wanted me to find two cyclical compounds that are 'structural' isomers of the molecular formula given in the question. The two isomers I came up with are: 1,2-dichlorocyclopropane and 1,1-dichloropropane since I thought that structural isomers are molecules with the same molecular formula but different arrangements of atoms. However, the mark scheme to this question states that the answer is: '(cis or trans) 1,2-dichloropopane', which is confusing to me since I thought that cis/trans isomers are stereoisomers and not structural isomers where stereoisomers are molecules with the same structural formula but different arrangements of atoms in space.

So is the mark scheme correct in it's solution?

To answer your question about two different structural isomers, the only two possibilities are two $\ce{Cl}$ either on same $\ce{C}$ atom or on two different $\ce{C}$ atoms, and that's how you get the two structural isomers. So, one should be $\text{1,1-dichlorocyclopropane}$ and the other one should be $\ce{1,2-dichlorocyclopropane}$.

Here is a picture to demonstrate that.. 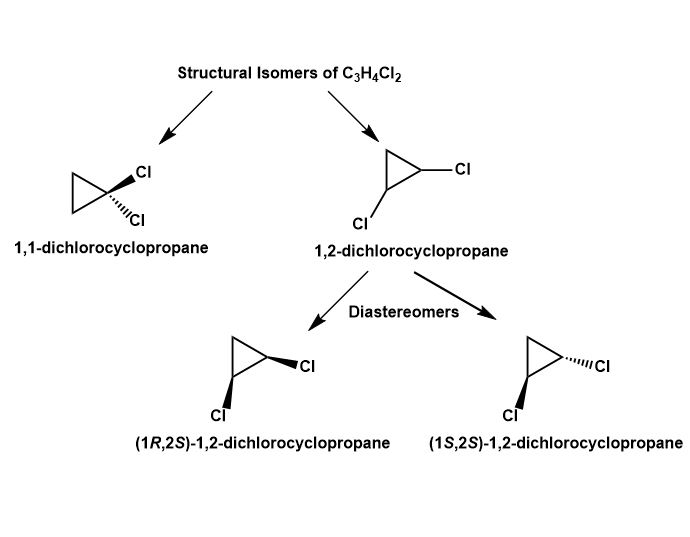