Is there a similar characteristic of the lanthanide contraction in the other transition metal groups?

Basically, does the lanthanide contraction also occur with the 4d, 6d groups as well? I am at a lack of understanding in this topic, I am just wondering what specific elements does this jump in a lower atomic radii occur. It seems to happen due to the d orbitals being occupied? I am making that judgement based on this graph.
I am hoping someone can explain, as one orbital seems to make all the difference. 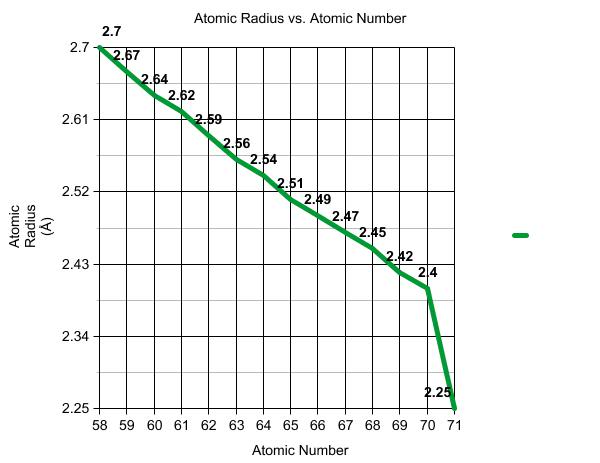 Hope I interpret your question correctly:

A decrease of atomic radii occurs in every period (from left to right). Atomic radii of lower periods are in general larger (Increase from top to bottom). This simple behavior only holds true for elements that only have p-block and s-block electrons.

The first anomaly of this behavior is the d-block contraction. This can be seen in the 4p, 5p, 6p and 7p elements (Elements to the right of Ga, In, Tl). For example the atomic radius increases about 60 % from C to Si. The difference of Si and Ge with the added p-block contraction is just 20 %.

The lanthanoide contraction occurs when the f-block is added. For this reason the 4d and 5d elements are very similar in size. For example Hf (5d, 160 pm) is even smaller than Zr (4d, 159 pm).

Finally the actinoide contraction should have the same effect on 6d elements. But I'm not sure if realiable numbers for the atomic radius exist for those elements.

Not the answer you're looking for? Browse other questions tagged physical-chemistry periodic-table or ask your own question.

8
Is there a common name to refer to the groups 13 and 14?
4
Hybridisation and the Schrödinger equation
44
What volume does one mole of an ideal gas occupy?
8
Why doesn't D block contraction affect the other P block groups 14 15 16 etc
3
Geometry of the transition metal complex in solid dipotassium bis(oxalato) copper(II) tetrahydrate
2
Why does the ionization enthalpy of elements across a period not follow a regular pattern while the atomic size always decreases?