Okay, so I'm trying to derive an important formula which states that - ∆G(r) = ∆G° + RTln( RQ ) where ∆G(r) is the instantaneous rate of change of Gibbs energy with respect to moles of reagent consumed (am I right on this?) I'm hight confused because I have 'almost' derived it but due to some conceptual difficulty I'm not able to get the exact formula!

NOTE: (1) Please ignore any non expansion work done on the system and tell my mistake as simply as possible because I have just started thermodynamics.

(2) The line above G represent molar Gibbs energy of substance. The small letters on the side of the symbol of reactent are the stochiometric coefficients.

(3) Many times I see variations of this formula, instead of ∆G(r) they simply use ∆G, there is a difference between two. Is this formula valid if ∆G is used instead of ∆G(r) in left hand side of equation? Also don't see any 'sense' in using ∆G because if ∆G is there then we need the initial and final quantities of the substances in the reaction but in the reaction quotient we plug the instantaneous activities of reactents and products. 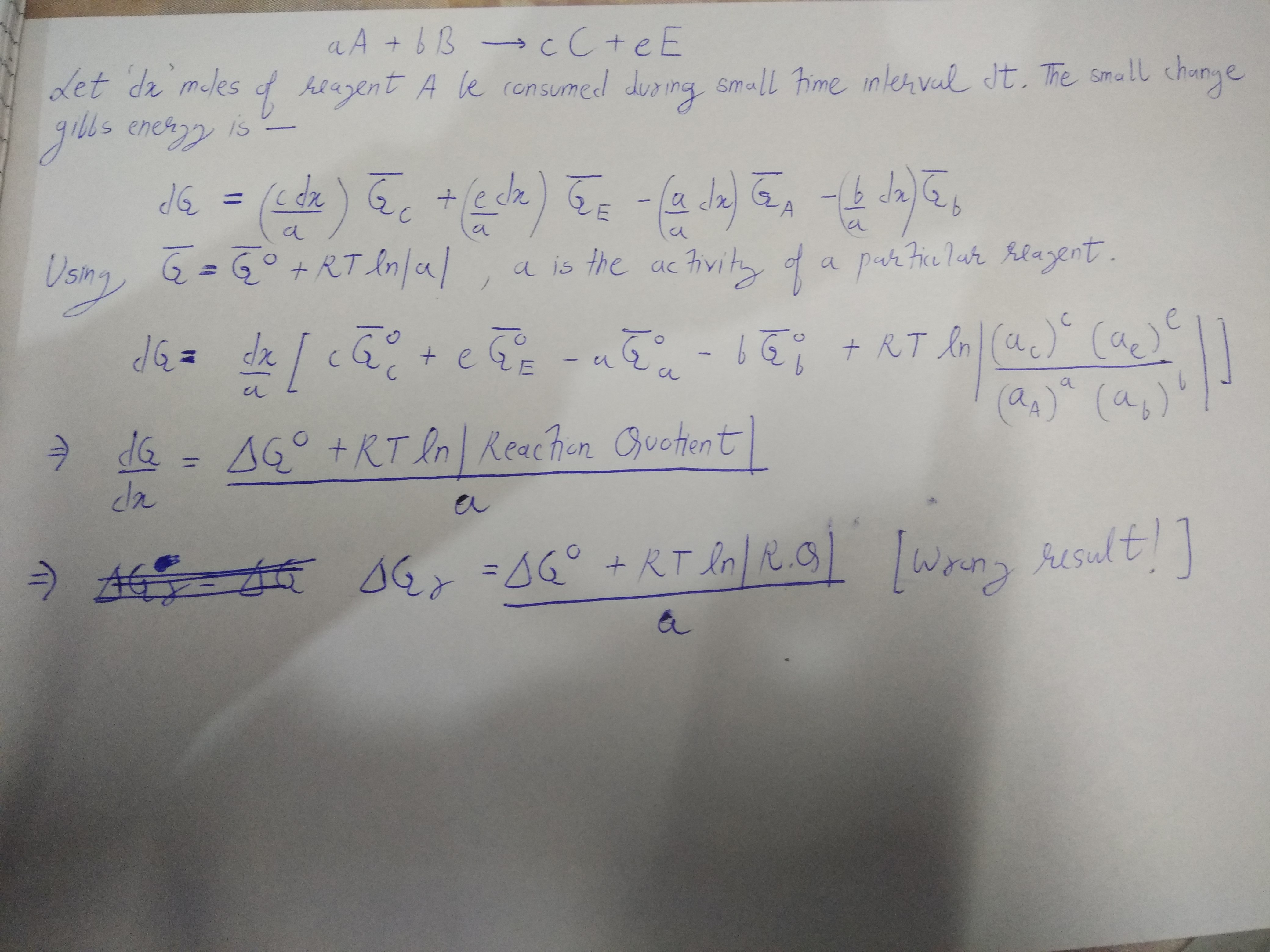 I'm getting the above equation but a stochiometric coefficient is also included in this ! Obviously it is wrong. Kindly tell me my mistake.

∆G(r) is the instantaneous rate of change of Gibbs energy with respect to moles of reagent consumed (am I right on this?)

If you update the definition of the Gibbs energy of reaction, you will get the expected equation in your answer.

Textbooks and other sources are often fuzzy concerning the distinction of $\Delta G$ vs $\Delta_r G$. You are right in saying that the formula does not make sense if you are calculating the difference between two states with different concentration. The other thing that is fuzzy are the units, energy vs. energy per amount (e.g. kJ vs kJ/mol).

I think you are using the first approach that I described. So, here is the analysis based on the first approach. Suppose you have the following numbers of moles of A, B, C, and D in the reaction mixture at some time: $n_A$, $n_B$, $n_C$, and $n_D$.

Not the answer you're looking for? Browse other questions tagged thermodynamics equilibrium stoichiometry reactivity free-energy or ask your own question.