Why is the definition of the mole as it is?

I have asked my teacher, as she was introducing the concept of mole to us, why that number was chosen, instead of more convenient one. She told me that it came from the definition of the mole, that is the number of atoms in 12g of Carbon 12. When I asked why that definition was chosen, she answered me that my question wasn't really a question, and I understood from her stare that asking why? twice in a row was not appreciated.

However, I certainly hope that this definition wasn't chosen randomly and that there is a reason for it being it.

I gave it some thought and I came to believe that it may be for convenience after all. There are 12 nucleons in a carbon atom and if we say that the electrons mass can be neglected, then we get that a mole is the number of nucleon it takes to get one gram of them. However, can we really neglect the mass of electrons, when the atoms get bigger? And if so, why do the element's mass per mole do very rarely end up being integers?

This makes me think there may be another reason, or some things I do not understand. And if there are no reason, then I guess I might just as well be doing religious studies..!

Why is the definition of the moles as it is?

It is a rather arbitary definition that the mole is the number of atoms in 12g of carbon 12. This has not always been the definition. For example, prior to 1960, the definition was based upon oxygen rather than carbon-12.

The first standard was based upon 1 gram of hydrogen. Later, the standard was changed to 16 grams of oxygen being a mole, for convenience because oxygen formed compounds with many other elements. Eventually it was realized that elements including oxygen have different isotopes of different mass, and the mass of a particular isotope is a more specific and measurable standard than the mass of natural abundance oxygen. 12 grams of carbon-12 matches the old standard of 16 grams of natural abundance oxygen more closely than choosing 16 grams of oxygen 16.

can we really neglect the mass of electrons, when the atoms get bigger?

The mass of a proton or neutron is about 1836 times that of an electron. So depending upon the ratio of neutrons to protons, electrons are at most 1/1836 of the mass of a neutral atom. If accuracy of more than 1 part in 1836 is desired, it is important to consider the electrons, regardless of whether atoms are big or small.

why do the element's mass per mole do very rarely end up being integers?

No element other than carbon-12 will exactly be an interger. This is because masses of atoms depend upon number of protons, neutrons, electrons and binding energy.

In other words, considering that carbon-12 has an equal number of protons and neutrons (and electrons), other isotopes with a 1:1 proton/neutron ratio would have essentially integral atomic masses except for binding energy. For example cadmium 112 is 111.90 instead of exactly 112 because binding energy is slightly more than 0.1 amu, partially offest by a higher number of neutrons than protons, the neutron mass being slightly greater than the combined mass of an electron and proton.

As pointed out by Matt Black, the natural abundance atomic masses further deviate because they are weighted averages of the masses of isotopes of a given element, weighted by their abundance on Earth.

Why is the definition of the moles as it is?

Here what say The International System of Units (SI)

“Atomic weights” were originally referred to the atomic weight of oxygen, by general agreement taken as 16. But whereas physicists separated the isotopes in a mass spectrometer and attributed the value 16 to one of the isotopes of oxygen, chemists attributed the same value to the (slightly variable) mixture of isotopes 16, 17 and 18, which was for them the naturally occurring element oxygen. Finally an agreement between the International Union of Pure and Applied Physics (IUPAP) and the International Union of Pure and Applied Chemistry (IUPAC) brought this duality to an end in 1959/60. Physicists and chemists have ever since agreed to assign the value 12, exactly, to the so-called atomic weight of the isotope of carbon with mass number 12 (carbon 12, 12C), correctly called the relative atomic mass Ar( 12C). The unified scale thus obtained gives the relative atomic and molecular masses, also known as the atomic and molecular weights, respectively

Atomic Weight' - The Name, Its History, Definition, And Units Prepared For Publication By P. De Bievre' And H. S. Peiser

The unit could be fixed arbitrarily. By choice, it was linked to 12C and the macroscopic mass unit, the kilogram of the SI. Nevertheless, one should note from the definition below that the magnitude of that link factor of NA does not affect the amount of substance of any entity.

Can we really neglect the mass of electrons when the atoms get bigger?

Why do the element's mass per mole do very rarely end up being integers?

The "mass defect" that is related to the fact that: $$E=mc^{2}$$ So the mass is linked to the energy, different elements have different energy due to different Nuclear binding energy and so different mass!

Natural abundance (NA) is not at the root of the problem, your observation is valid not only for Standard atomic weight (Ar, standard,) that take into account the isotopic abundance but also for the weight of single isotopes. The periodic table below shows you that also element without isotopes (blue background) have non integer mass. Of course, if you consider the standard atomic weight of an element ( that is the result of a weighted average so you might already expect that is a non integer... ) the isotopic abundance have a greater impact on the result, but if you consider the atomic mass as defined by IUPAC so you are analyzing a single isotope the root of the problem are the reasons described above. 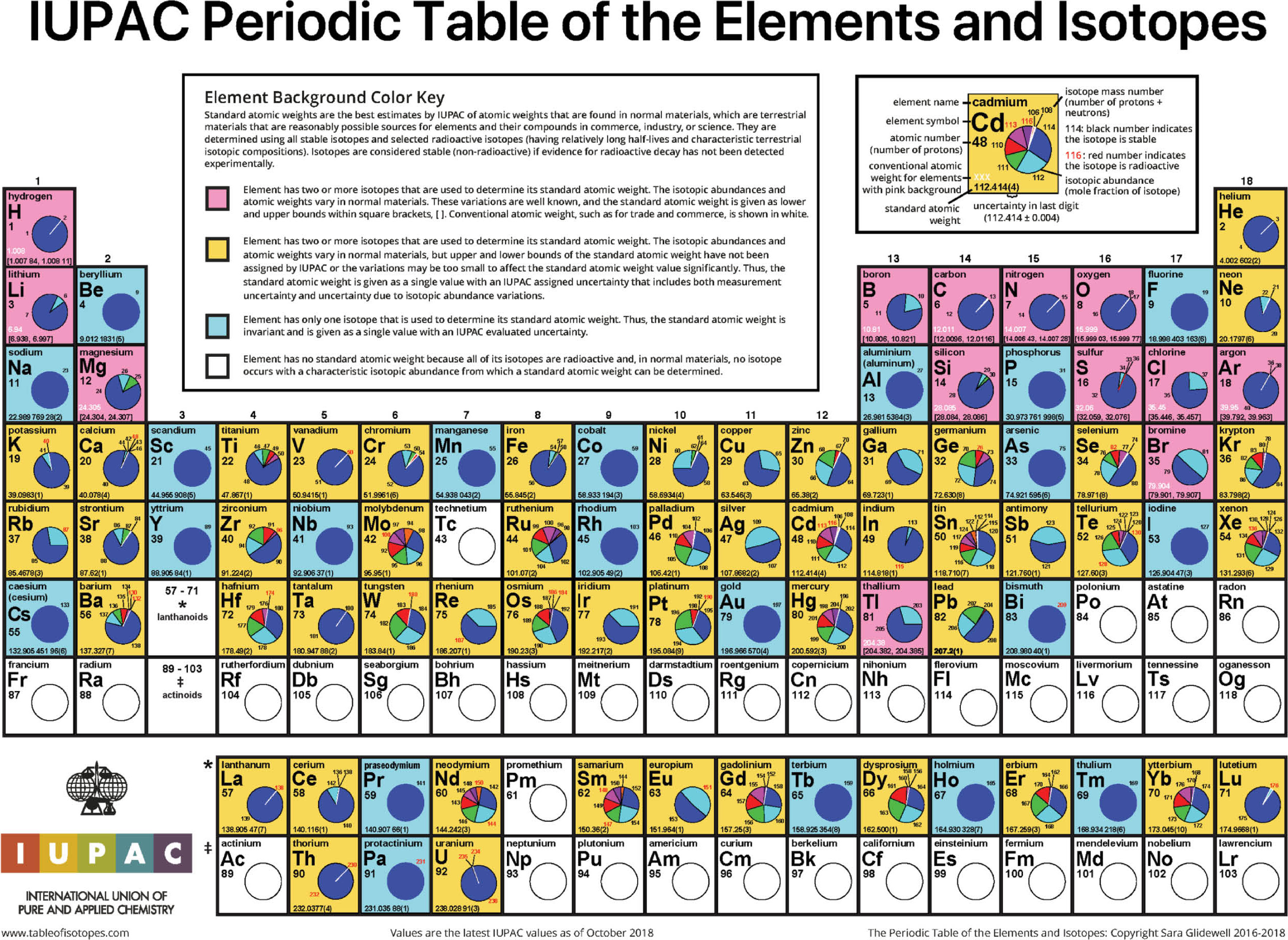 11
Why is the mole a unit of measurement?
14
What advantages does the mole have over counting large numbers using SI prefixes?
3
What is the standard molar weight of Carbon, and why?
22
Why has the mole been redefined for 2019?