Reaction of diacetyl with acid

What happens when diacetyl, that is, butan-2,3-dione is treated with acid?

I guess there would be acid catalysed aldol formation. But what would the final product be? I can see too many possibilities. Please help me out here.

Quinone 2 was prepared under basic conditions by von Pechmann.1 Diels and coworkers2 isolated from an alkaline reaction a dimer, C8H12O4, which was assigned lactonic structure 3 with no spectroscopic evidence.3 The structures are color-coded to display the four carbon moiety of diacetyl. Clearly, lactone 3 shows a branched red carbon framework. An undefined "benzylic acid rearrangement" was suggested without details. The structure was later revised to diketone 4 based upon spectroscopic evidence and a more reasonable normal carbon chain.4

Trimer 5, C12H18O6, has also been isolated under alkaline conditions and the stereochemistry confirmed by NMR and IR.5

An acid-catalyzed condensation of diacetyl in dilute aqueous acetic acid (70oC, 13 days) leads to C10 structure 10.6 The structure was confirmed spectroscopically and by periodate cleavage with loss of acetic acid with concommitant formation of diketone 11. Structure 10 does not form a hemiketal as does structure 5 owing to the resonance stabilizing effect of the α, β-unsaturated ketone. The mechanism proposed is described in the sequence of steps 4 --> 10.

As can be seen from the examples provided --- and that's not all of them --- the self-condensation of diacetyl is not straightforward. 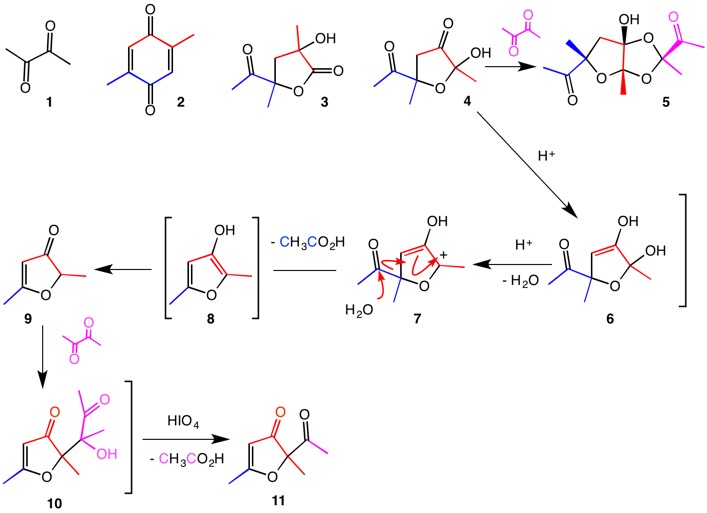 15
Reduction of glucose to hexane with hydroiodic acid
7
Mechanism of a cyclization reaction - why does an enol ether form?
1
Mechanism of the reaction of cyclohexanone and nitric acid to form Adipic acid
1
Reaction of vicinal diol in presence of benzaldehyde
4
When does a pinacol undergo dehydration or rearrangement?
1
Mechanism for formation of Quinol from a Phenolic Ether
11
Alcohol or Carbonyl - Which is more reactive towards PCl5?
0
Reaction of orthocresol with butyrolactone in presence of AlCl3 and heat