Does the Location of Line-Dash-Wedge Notations Matter?

In Line-Dash-Wedge notation, when illustrating that an atom or bond is directed towards or away from the viewer (solid triangle for coming forward, dotted lines for going back), does the location of these lines matter when doing illustrations?

For example, a THC molecule. 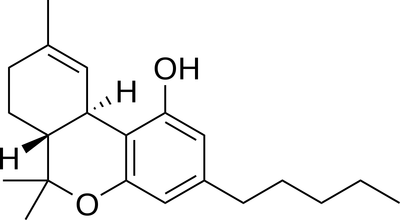 The two hydrogen atoms there. Could they be placed inside the carbon rings instead of appearing outside, like below?

I understand that there's a whole host of issues with that otherwise, but just asking about the triangle and dashes in particular.

Yes, both inner and outer placements are possible with some nuances.

When two substituted fusion atoms are adjacent, placing both substituents outside the ring system will typically cause them to overlap. In those cases, it is better to draw one of the substituents within the ring system. A substituent drawn in this way should preferentially be drawn exactly vertically or horizontally, whichever direction would minimize overlap with other atoms and bonds. 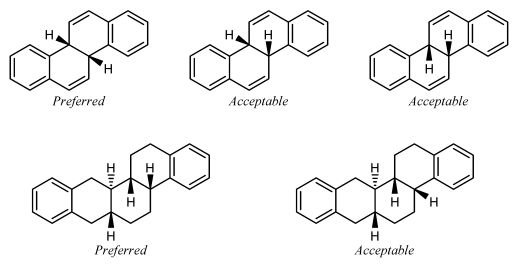 It is not acceptable to orient two substituents within the same ring if the ring has fewer than eight atoms. One or both of the substituents should be oriented outside the ring system, minimizing overlap as best as is possible.

Substituents on interior fusion atoms have no option other than being drawn within the ring system. As above, such substituents should preferentially be drawn exactly vertically or horizontally, according to the direction that would minimize overlap with other atoms and bonds.

2
Wedge Dash Diagram of 1,2-Dichloroethane
2
Does the arrangement of atoms around a chiral carbon matter?
1
What does this curve over the C-B bond mean?
4
Can wedge and dash bonds on 1, 2 position of cyclohexane ring be used to signify trans orientation of the substituents?
3
Does direction matter in breaking a bond?
1
Reagent notation: meaning of dash(-) and line(|) or slash(\) in reagents
1
Does the 3D structure generated with MolView violate the wedge-dash rules of "above/below the plane"?