Ester of glycerol and glyceric acid

What is the ester of glycerol ($\ce{C3H8O3}$) and glyceric acid ($\ce{C3H6O4}$)? I couldn't find any information about it online, so is this reaction even possible? I'm not sure what would happen, from my understanding, the alkyl of the alcohol replaces the hydrogen in ($\ce{-COOH}$) the carboxylic acid. But I can't work out this one.

I think it could be $\ce{C6H12O6}$ (mono ester) or $\ce{C12H23O15}$ (tri ester) , but I'm not sure. Is this correct? Is there a characteristic difference between the 3(mono, di or tri esters)? What dictates which one will be formed? Also, do the compounds have any significance?

The formation of the triester of glyceric acid and glycerol cannot be done directly because of the poly-esterification of glyceric acid itself. This problem can be circumvented by employing the acetonide of glyceric acid. Subsequent to the esterification, selective hydrolysis of the acetonide in the presence of the esters can be effected.
Esterification with a single enantiomer of the acid would produce a single triester, either 1A or 1B. Esterification with the racemic acid could form, in principle, 16 (24) stereoisomers. However, this number is reduced to eight. Column A lists 6 permutations of the stereochemistry with two missing owing to the non-stereogenic nature of C2 in 1A and 4A. Column B lists the enantiomers of column A. Rows 2 and 5 are duplicate as are rows 3 and 6. The eight stereoisomers are within the black box (1A through 4B). While the enantiomeric pairs in each row (1, 2, 3, 4) are formed in equal amounts, the four racemates are not necessarily formed in equal amounts.
The assignment of the r/s descriptors at pseudoasymmetric center C2 in stereoisomers 2A, 2B, 3A and 3B are governed by the 2013 CIP Rules 1a and 5. 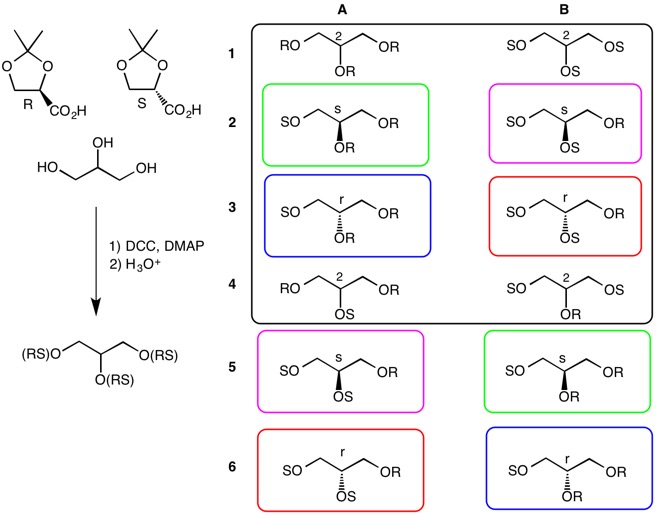 Not the answer you're looking for? Browse other questions tagged organic-chemistry alcohols esters or ask your own question.

4
Are all esterification reactions reversible? What is their general mechanism?
0
Differences between alkyl halides and alkyl tosylates
2
Routes of formation of esters with highest yield
2
Mechanism for oxidative cleavage of tertiary alcohols by NaOCl
9
Is sodium borohydride really a better base than an alcohol?
4
Naming of ester alkoxide
2
Ester as a side product in the synthesis of bromoalkane from alcohol. Is it correct?
4
Are there amide versions of lactides and lactones?