I looked this question up and still couldn't understand. Why, in $\ce{SO4^2-}$ don't the 4 oxygens create double bonds.

In that case the all the oxygens will have 0 formal charge while the sulfur will have -2.

When comparing formal charge of -2 on the sulfur, it is indeed less stable than no formal charge at all, and that is why it should be the most common resonance structure. But everywhere I looked that was not the case, $\ce{SO4^2-}$ only created 2 double bonds and I cant understand why. Cant the oxygens create coordination bonds with the sulfur?

What you have seen is not an accurate depiction of the bonding situation according to the currently accepted theory. The correct structure of sulphate, shown below, has exactly zero double bonds. Martin performed a calculation on the closely related sulphite ion (in which there is one less oxygen leading to a lone pair on sulphur) which shows zero π-type bonding orbitals. Unfortunately, I found no calculation of sulphate’s structure in a quick search but rest assured that it will be the logical extension of sulphite. 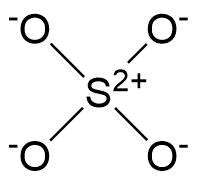 In this structure, sulphur is surrounded by exactly eight valence electrons as predicted by the octet rule. If you come across any depiction of a main-group compound in which an atom has more electrons in its vicinity than the octet rule allows, chances are this depiction is either simplifying (for example: drawing a 4-electron-3-centre bond as if it were two single bonds), an unstable reaction intermediate or outright incorrect.

Sulphur cannot form more than four traditional 2-electron-2-centre bonds (double bonds counting as two bonds, triple bonds as three bonds) due to a lack of available orbitals. On a very basic, general and simplified level, such a (localised) 2e2c bond is formed when an orbital of each atom overlap, resulting in a bonding and an antibonding orbital. Sulphur only has four such orbitals available (one 3s and three 3p) for bonding, so any electron exceeding the first eight would have to be placed in an antibonding orbital – but that would cause a decrease in bond order rather than an increase.

Historically, the depiction of sulphate that you gave was ‘explained’ by sulphur using its 3d orbitals for bonding. These orbitals are virtual (unoccupied) but do exist mathematically. However, their energy is too high for any meaningful bond to be formed. It can be calculated (and has been, somewhere on this site that I cannot locate at the moment) that the participation of d orbitals in such compounds is very low – certainly far lower than an $\mathrm{sp^3d}$ or even $\mathrm{sp^3d^2}$ hybrid orbital would require. Thus, it is best that the idea of double bonds in sulphate be purged from the textbooks yesterday.

The sulfate ion is derived from the sulfuric acid molecule: 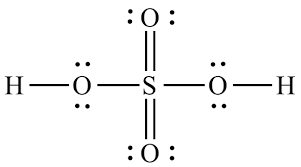 Hypothetically if $\ce{SO4}$ existed, with all $\ce{O}$ atoms double-bonded to the $\ce{S}$, then the sulfur would have a total of 16 electrons in its valence shell, which would make it more unstable. But the main reason is that sulfur only has 6 valence electrons in the first place, so it can only form up to 6 covalent bonds. This gives it a total of 12 valence electrons.

In formal charge theory, the idea is indeed to try to keep individual FCs as close to zero as possible, but also to break the octet rule as little as possible. The sulfate ion is very stable: just because something is an ion does not mean it is unstable. In fact, it often is much more stable than uncharged molecules.

Not the answer you're looking for? Browse other questions tagged resonance lewis-structure formal-charge or ask your own question.

14
Is the S–O bond strength in sulfur trioxide or sulfite anion larger?

0
How is (SO4)^2- Charged if S and O all are Neutral Themselves?
4
Are the Phosphate and Sulfate ion diagrams with double bonds an invalid picture?
1
Why does calculating formal charges help us draw correct Lewis structures?
2
Arrow pushing: why does the O become positive when its lone pair becomes a double bond?
0
Do conjugated double bonds take priority over a +1 formal charge?
6
Formal charges on polyatomic ions
10
Why does HNO2 not have resonance?