Can ethylene glycol enhance the acidity of orthoboric acid?

Boric acid is a weak monobasic acid but on the addition of certain organic polyhydroxy compounds, such as mannitol, glycerol, dextrose or invert sugar, it is transformed into a relatively stronger acid. Ethylene glycol cannot give this test (the reason is uncertain).

I do know that cis-diols form a boron-ether compound with the $\ce{[B(OH)4]-}$, leading to an increase in acidity. But is it true that ethylene glycol is exceptional? And is there any possible reason for it?

Boric acid is a very weak acid with a $\mathrm{p}K_\mathrm{a}$ value of 9.2 and does not dissociate in aqueous solution as a Brønsted acid. Yet, in aqueous solutions, it acts as a Lewis acid by accepting a hydroxyl ion to form the tetrahydroxyborate ion $(\ce{B(OH)4-})$, as confirmed by Raman spectroscopy (Ref.1):

Note that in solutions that are more concentrated than $\pu{0.1 M}$, boric acid acts as a much stronger acid than in diluted solutions, and becomes comparable to acetic acid. As shown in the equation $(1)$, the apparent ratio of the concentration of borate ions to that of boric acid molecules in the solution progressively increases from $1:1000$ at $\pu{0.2 M}$ to $1:5$ at $\pu{3.5 M}$ (Ref.1).

As shown in the above figure, complexation with polyols increases the acidity of boric acid due to the formation of cyclic borate esters. For example, the dissociation constant of boric acid becomes about $7 \times 10^{−6}$ in the presence of mannitol, i.e. a $10$- to $1000$-fold increase compared to that without the polyol (Ref.1). Such behavior is not shown on the addition of monofunctional alcohols, nor of glycols, nor of the trans-form of cyclopentane diols, but it is shown upon the addition of the cis-form of the latter compounds. AS described in the Ref.1:

The phenomenon depends on the formation of monocyclic or dicyclic compounds with the polyol groups, which are more highly dissociated than the boric acid itself, and it follows that the only compounds with two hydroxyl groups suitably placed on the same side of the C–C link can react in this way. Thus, the stability of the borate complex formed is strongly dependent on the type of diol used. If the diol involves the OH groups oriented in such a way that they accurately match the structural parameters required by a tetrahedrally coordinated boron, a strong complex is formed. For instance, erythritan (3,4-cis-dihydroxytetrahydrofuran) has produced a much lower $\mathrm{p}K_\mathrm{a} \ (\approx 4.8)$ with boric acid (more acidity, stronger complex; Ref.3). 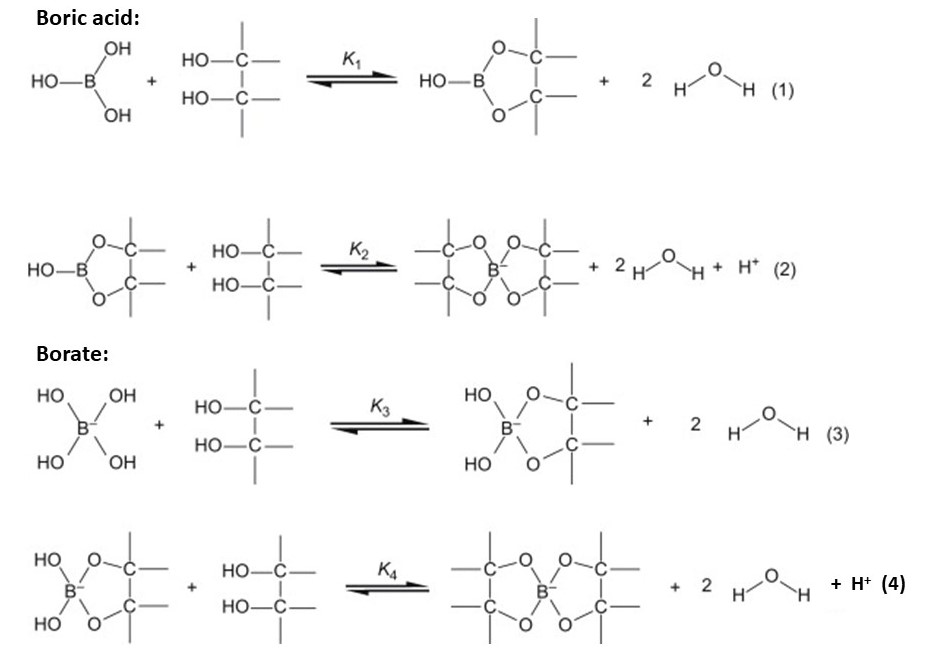 The equilibrium constants of borate complexes have been investigated in several studies, and some of the data are listed in the following Table (Ref.3):

It has been shown that the amount of acidification produced upon the addition of polyol is proportional to the extent of ester formation (Ref.3). Basically, 1,2-Ethanediol is ethylene glycol and it also has a $K_1$ and $K_2$ values as well although they are not pronounce as those of D-Mannitol or even Catechol. Therefore, the increase in acidity may not significant, but it sure does the trick. The lower values of $K_1$ and $K_2$ are probably due to restrictions in structural parameters required by a tetrahedrally coordinated boron.

I do not see any reason why the following reaction cannot take place, which will consume $\ce{[B(OH)4]-}$ and the concerned reaction will move in forward direction to increase the acidity of orthoboric acid$^1$. 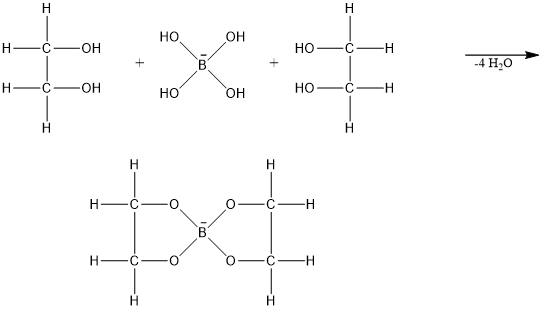 According to wikipedia, "With polyols containing cis-vicinal diols, such as glycerol and mannitol, the acidity of the boric acid solution is increased."

If someone has aceess to this or this journal, then please add.

Not the answer you're looking for? Browse other questions tagged acid-base boron-family or ask your own question.

25
The acidity of boric acid
3
Boric Acid - Mechanism of Acidity
2
Acidity of ester and benzoic acid
11
Acidity of hydrochloric acid in acetic acid
12
How does strength of boric acid solution increase in presence of salicylic acid?