Intuition for why catalyst affects both forward and reverse reactions equally?

I have looked for quite a long time on the site however all the answers involve mathematical explanations involving Arrhenius's equation. I would really like an intuitive reason (or one using collision theory?) as to why adding a catalyst should increase both reactions equally. 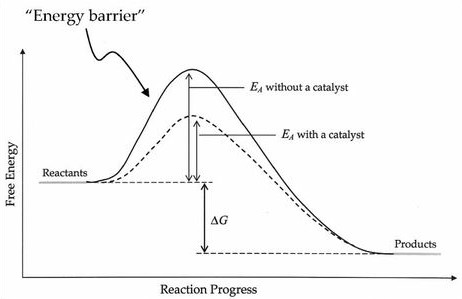 I don't know if this qualifies as an intuition answer or not, but it's very easy to show mathematically. The key is that the rate constant is not linearly proportional to the activation energy. By the Arrhenius equation, $k = Ae^{-E_\mathrm{A}/(RT)}$, so the rate constant is dependent on an exponential of the activation energy. The equilibrium constant $K$ is a function of the ratio of the forward and reverse rate constants. For a simple reaction $\ce{A <=>[k_1][k_{-1}] B}$, the equilibrium constant $K=\frac{k_1}{k_{-1}}$.

Using simple rules of exponents, this reduces to

Now if we subtract a quantity $E_\mathrm{cat}$ from both activation energies, the same derivation gives

so $K$ is unchanged.

Intuitively, it may help to think about the fact that the reverse reaction is necessarily composed of exactly the same microscopic states as the forward reaction, just happening in reverse order (by the principle of microscopic reversibility). The catalyst can stabilize one of more of the states on that reaction pathway, but cannot influence what direction that stabilized state reacts in. So making a microscopic state more easily achievable in the forward direction necessarily makes it more easily achievable in the reverse direction.

You are asking a quantitative question, but you are hoping for an answer besides the "mathematical explanations" already on the site. That might be impossible, but here is an attempt to talk about it without explicitly using the Arrhenius relationship.

It seems that if you add a catalyst it should decrease the activation energy by a constant for both forward and reverse reactions.

If you clarify this a bit and say the difference in activation energy with or without the catalyst is the same for the forward and the reverse reaction, then this is correct.

Thus it should decrease the forward activation energy proportionately more than the reverse reaction then the forward reaction should go forward, and shift equilibrium.

I would really like an intuitive reason (or one using collision theory?) as to why adding a catalyst should increase both reactions equally.

Collision theory is good to explain the concentration dependence of rates. It is less useful for explaining what fraction of the collisions leads to a reaction. It is easy to explain why a catalyst would be helpful for reactions in both directions. It is hard to make quantitative predictions based on a non-quantitative model. Even in collision theory, you have to know the distribution of the energies of collisions to determine how the fraction of successful collisions changes when you lower the activation energy by a certain amount. If you know the distribution and do the analysis, you arrive at the Arrhenius relationship.

In his comments, Ivan Neretin had an excellent argument about how our world would change if catalysts could change the equilibrium constant. His argument works like a mathematician's proof of contradiction: It has to be this way because if it were any different, it would contradict something else we know (well, if we are talking about math, contradict an axiom we would like to keep). So here is my version of the contradiction: We could stick in catalyst into the reaction mix, the reaction would go in one direction until it reaches equilibrium, we would pull it out again, the reaction would go in the other direction to reach equilibrium. Imagine these are reactions in a battery. Batteries go toward equilibrium when we use them as a source of energy, and to charge them going away from equilibrium, it takes work. In our hypothetical scenario where catalysts change equilibrium constants, we would never have to charge the battery again. That is not our collective experience.

Not the answer you're looking for? Browse other questions tagged equilibrium kinetics theoretical-chemistry catalysis or ask your own question.

3
Effect of Catalysis on Reaction Rate in elementary Reaction
3
Why does a dynamic equilibrium exist?
5
How does a catalyst accelerate both forward/reverse reactions simultaneously?
15
Won't the net effect of a catalyst be zero if it creates a new path with lower activation energy?
2
Do catalysts increase the rate of exothermic reaction more in a reversible reaction?
1
Do catalysts shift equilibrium constant towards 1?
2
reaction coordinate, kinetics, equilibrium in example
2
Why does a catalyst increase the forward and reverse reactions equally
2
Changing pressure on equilibrium