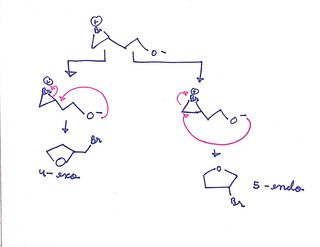 Your reasoning is totally correct according to Baldwin's Rule - the 4-exo-product would be more stable than the 5-endo-product ( see : This for more details).

But your method may be wrong in the given question the product A was first formed and then a ring closure step was performed using $\ce{KOH}$ as shown below : 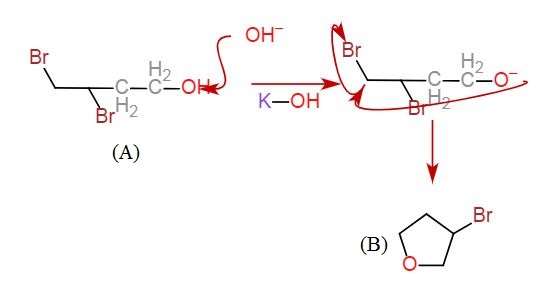 here the 5-exo-trig ring closure is favoured according to Baldwin's rule .

Let me also address something that may be a doubt ( It was mine ) i.e. why doesn't the oxygen atom attack the bromonium Ion in the first step ? this is because even if it will attack you will also form a acid $\ce{HBr}$ which will cause the cleavage in the cyclic ester we just formed returning us to the original reagent hence it doesn't attack.

Not the answer you're looking for? Browse other questions tagged reaction-mechanism nucleophilic-substitution or ask your own question.

8
Comparison of rate of dehydration of primary, secondary & tertiary alcohols on cyclohexane
7
Baldwin's rules exceptions: cations
8
How to rationalise the major product formed in a nucleophile promoted epoxide cleavage reaction?
8
On the mechanism of the nitrogen-removal step of the Wharton olefin synthesis
1
How do quaternary ammonium salts catalyse SN2 reactions?
6
Dependence of rates of neighbouring group participation on length of alkyl chain
3
How do I decide whether ring will expand in this reaction or not?
8
Why does a proton prefer to attack a double bond instead of protonating an alcohol in a reaction of unsaturated alcohol with sulphuric acid?
2
Action of KMno4/H+ and heat in this reaction