Sulfur is sometimes described as a hypervalent atom, or one that has more than eight valence electrons. This is possible to some extent; sulfur can indeed utilize its d-orbitals for bonding. However, recent quantum mechanical calculations suggest that the extent of this utilization is negligible. Therefore, your book is most likely representing the $\ce{Cl_2SO}$ molecule as a "charge-separated" molecule.

EDIT: Upon further thought this still makes no sense. Charge is conserved and thionyl chloride should always have 26 electrons (no matter how they are distributed). So perhaps, due to the high degree of ionic character in the $\ce{S-Cl}$ and $\ce{S-O}$ bonds, the missing two electrons are "dispersed" among these ligands. (This is speculation). Perhaps your book is genuinely in error. Perhaps they did not count a lone pair on the central sulfur atom or otherwise miscounted the number of electrons?

EDIT 2: Here's a picture of two possible Lewis structures of thionyl chloride; as we can see, the book agrees that the thionyl chloride molecule is better represented as a "charge-separated" molecule. Nonetheless, all the electrons are present. 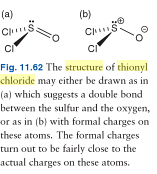 EDIT 3: Here's a picture of thionyl chloride which makes it seem as if the molecule only has 24 valence electrons. NB: the lone pair is still there and its presence is implied through the lack of any indication of a non-zero formal charge on the sulfur atom.