In an extraction process compound A is transferred from one solvent to another solvent. The two solvent may be, for example, water and dichloromethane. These two solvents are immiscible and when mixing them together, one of the solvents, say solvent 1, forms droplets that are dispersed in solvent 2, as depicted [...]. 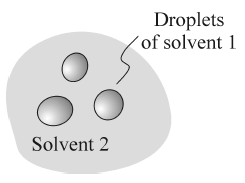 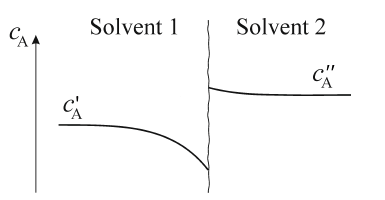 (a) In which direction is the mass transfer, from solvent 1 to solvent 2 or vice versa? Motivate your answer by a short explanation (2 pt).

How can you tell which direction the mass transfer will go?

I would assume that because solvent 1 forms droplets in solvent 2, then solvent 1 should be the organic phase. Would the mass transfer be from solvent 2 to solvent 1? Because the aqueous phase would contain compound A. 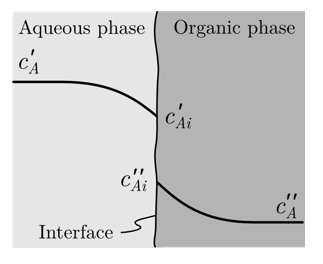 Just keep in mind: the driving force of mass transfer is a concentration gradient. Nature tries to 'equilibriate' a difference in concentration between two phases.

Mass and Heat Transfer are often taught in one course as they have many similiarities, but Heat Transfer offers a more intuitive introduction to the principles of transport phenomena in my view:

In heat transfer the driving force is the temperature gradient. We intuitively know that heat transfer will be from the hotter system to the colder system, and formally know that from the 2nd law of thermodynamics. Can you see the similarity to mass transport?

Not the answer you're looking for? Browse other questions tagged concentration extraction immiscibility or ask your own question.

20
67 failures at extracting acetaminophen from Excedrin(R)
6
How do I create a concentrated solution of singlet oxygen (in the dark)?
2
How to calculate the concentration of a monoprotic organic acid that was extracted into an ethyl ether layer?
2
Why is a weak base more able to deprotonate a strong acid than a weak acid?
2
Determine direction of mass transfer
0
Are glycosides more soluble in dichloromethane than in water?