The oxidation of aldehydes and alpha-diketones with peroxy compounds

Recently, I have been reading up on the Baeyer-Villiger (BV) oxidation. The oxidation is most commonly discussed for ketones. However, the oxidation also works for aldehydes and $\alpha$-diketones (Rojas, 2015).

I have mainly two queries:

The Baeyer-Villiger oxidation is conducted under acidic conditions such as an alkyl peroxide in the presence of a mineral acid (e.g.; H2SO4) or a peracid (e.g.; peracetic acid or m-chloroperbenzoic acid). In the reactions described in the diagram, the reactions of aldehyde 1 or α-diketone 7 are initiated by proton of the carbonyl oxygen followed by addition of peroxide (an alkylperoxide is illustrated). Ultimately, the oxygen of the RO-moiety is protonated and is the effective leaving group (ROH) in the rearrangement. In both sequences, the red route is favored; the blue route disfavored. Cation 3 is a more stable species than cation 5 because of hyperconjugation with the alkyl group or resonance stabilization if R'=aryl. Cation 3 affords a carboxylic acid while cation 4 would lead to formate ester 6.

In the case of peroxyhemiketal 8, acyl migration leads to cation 9 which is more stable than species 11, which has a positive charge adjacent to a carbonyl group, which is destabilizing. Thus, anhydride 10 is formed in preference to α-ketoester 12. 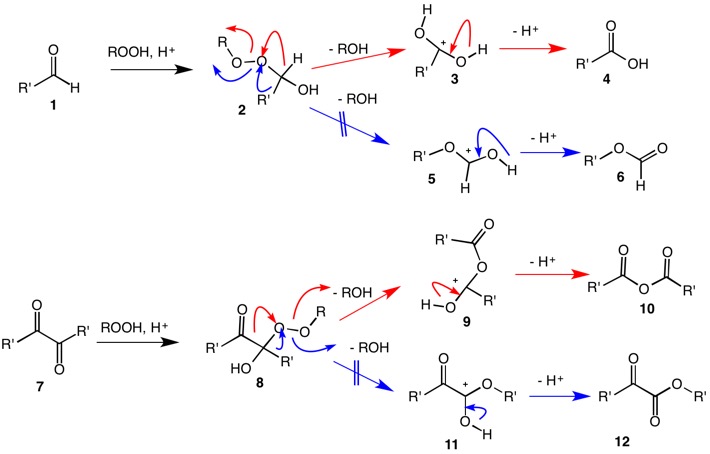 Not the answer you're looking for? Browse other questions tagged organic-chemistry organic-oxidation rearrangements or ask your own question.

1
Chromic acid oxidation of aldehydes and primary alcohols
9
Mechanism of toluene oxidation with CrO3
2
What is the mechanism for the oxidative cleavage of diketones via permanganate under basic/hot conditions?
4
Side chain oxidation with KMnO4/H+
1
Usage of TFA in Pfitzner-Moffat oxidation and Collins vs Jones oxidation