N-heterocyclic carbene metal complexes. Question about the delocalization of the nitrogen lone pairs

I am wondering why nitrogen lone pairs are delocalized in NHC metal complexes. What I can think of is, when complex is formed, plus charge is formed on the carbon atom and therefore delocalization from the nitrogen atoms. But there should be then "plus" sign like in the picture below. 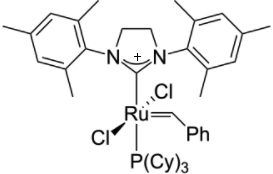 But these kind of carbene complexes are always depicted without the plus sign. Can anyone please tell me what I am missing out?

Some parts of this answer probably border a bit on personal opinion, but I will at least try to justify having such an opinion.

The first thing to do is to actually examine the heterocycle. What kind of ligand is it?

This is a carbene. It donates two electrons via the lone pair on the carbon in plane with the ring. Notice that there is a smear of positive charge from the delocalization of the $\pi$ system between the N-C-N system. That is balanced by the negative chage on the carbon, however. Overall, this ligand is neutral, so it is an L-type ligand.

What's the overall charge on this metal complex? This is a ruthenium(II) ion (2 chlorides, everything else neutral), so this is a $d^{8}$ metal ion. You have 2 electrons from the NHC, 2 from each chloride (4 total), 2 from the phosphine ligand, and 2 from the carbene (the double bond is back-bonding). That gives 10 electrons from ligands, so this is a fine-looking neutral 18 electron complex.

For a complex that's overall charge zero, why is there a plus charge hanging out by itself? Well, it turns out that we're extremely sloppy with charges. For example, the chlorides are X-type ligands but the phosphine is not. Do we stipulate this difference in the structure? No we do not, though we use it during electron counting. The authors here felt that the smear of positive charge of the carbene, which is how you would draw the structure in isolation, should be shown but chose not to show the negative charge of the carbene, which is the case by convention. That seems somehow inconsistent to me because the overall charge of this ligand is neutral.

Look at these other representations:

Both representations of the NHC are used: without explicit $\pi$ system and with.

Note that neither of them say anything about the positive charge. This seems more consistent to me, and these authors, at least, agree with me.

Not the answer you're looking for? Browse other questions tagged coordination-compounds organometallic-compounds or ask your own question.