This question was asked in my exam and I have done it properly until the third step. Unfortunately, although the last step looked like Wolff-Kishner reduction to me, I could not do it.

At first, via ozonolysis aldehyde groups will come and then aldol reaction would take place and by heating alpha-beta unsaturated aldehyde product will be formed. But then, what if I reduce it in the last step, my answer is not matching with any of the options given.

If you look carefully, the reagent for the first step is $\ce{O3/H2O}$, which is used for Oxidative ozonolysis. If the mechanism of ozonolysis is drawn, you will realise that a molecule of Hydrogen peroxide($\ce{H2O2}$) is released by the oxidation of the alkene to aldehyde and if that $\ce{H2O2}$ is not removed from the reaction mixture, it will oxidize the aldehyde ultimately to acid. That's why during reductive ozonolysis, people use reducing agents like $\ce{Zn}$ or $\ce{Me2S}$ or $\ce{PPh3}$ which can get oxidised themselves by the $\ce{H2O2}$ produced to $\ce{ZnO}$, $\ce{Me2S=O}$ and $\ce{Ph3P=O}$ respectively and your aldehyde is not oxidized to acid any more. But in this case no such reducing agents is used and thus the product of the first step in the diacid not di-aldehyde. After that heating with $\ce{Ca(OH)2}$ doesn't perform aldol reaction here but eliminates one molecule of $\ce{CaCO3}$ from the compound i.e. essentially decarboxylation and you are left with one carbon less i.e. $\text{Cyclopentanone}$. Then as you recognised correctly is the Wolff-Kisher reduction.

So your final product is $\text{Cyclopentane (B)}$. Here is the schematic of Oxidative ozonolysis releasing $\ce{H2O2}$ responsible for oxidizing the di-aldehyde to di-acid. 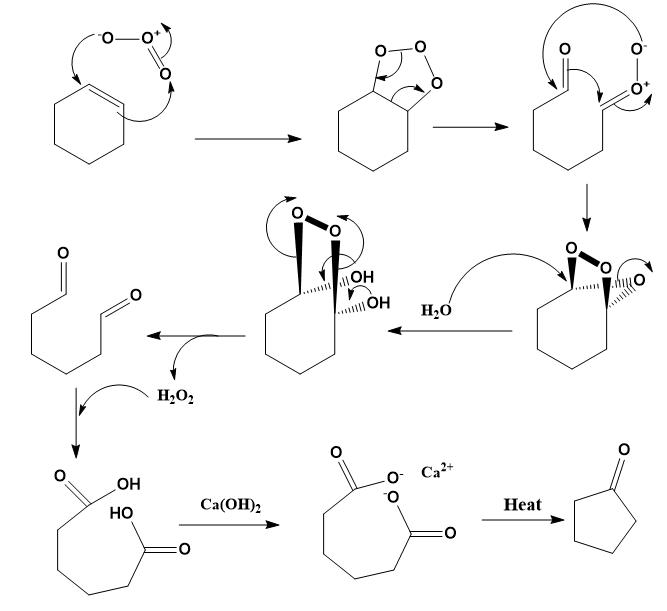 Not the answer you're looking for? Browse other questions tagged organic-chemistry carbonyl-compounds organic-reduction ozone aldol-reaction or ask your own question.