It is known that the oxidation of primary alcohols can result in aldehydes or carboxylic acids. The product obtained from the reaction is described as dependent on reagents and conditions;[1]

"Primary alcohols are oxidized to either aldehydes or carboxylic acids, depending on the reagents chosen and the conditions used."

A distinction is typically made between "weak" (eg. PCC) and "strong" (eg. chromic acid) oxidants[2], the former being capable of giving an aldehyde product while the latter carries out the oxidation to carboxylic acids. However, the accepted mechanism for the reaction shows that the oxidation always results on an aldehyde, which can then be further oxidized to a carboxylic acid through an hemiacetalic aldehyde hydrate forming in the presence of water.[1][3]

"Most other commonly used oxidizing agents [...] oxidize primary alcohols directly to carboxylic acids. An aldehyde is involved as an intermediate in this reaction but can’t usually be isolated because it is further oxidized too rapidly." 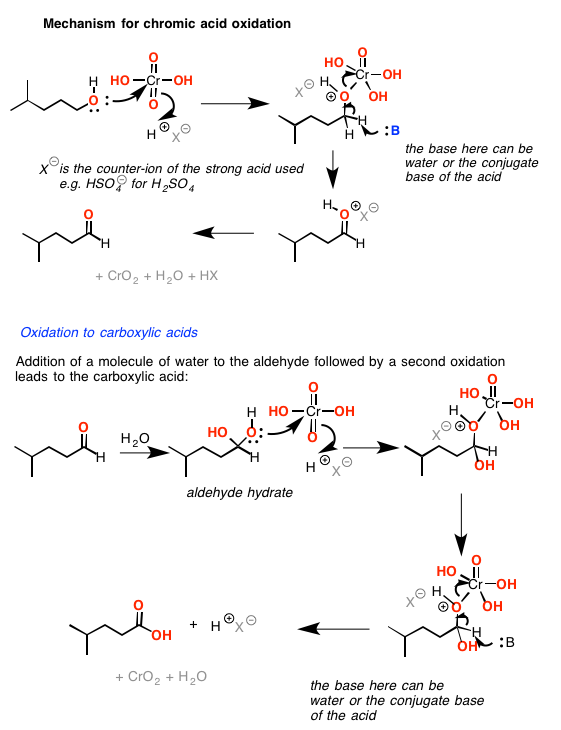 This indicates that it is the presence of water in the reaction medium which determines the product of the oxidation. Thus, "weak" oxidants could still yield a carboxylic acid in aqueous solutions (in fact, they are always noted to be used in anhydrous conditions) and "strong" oxidants will result on an aldehyde when used with organic solvants. If so, I fail to understand the classification of "weak" and "strong".
Furthermore, some sources, like Wikipedia, seem to imply the existence of a direct oxidation from primary alcohol to carboxylic acid, but I've been unable to find such a mechanism in bibliography, always ending up with the hydrate intermediary method.
To summarize:

After looking up more information and taking the comments of user55119 into account, I've decided to post an answer myself, hoping to clearly address the main question points.

Not the answer you're looking for? Browse other questions tagged organic-chemistry reaction-mechanism alcohols organic-oxidation or ask your own question.

6
Can carboxylic acids be oxidised further?
1
Chromic acid oxidation of aldehydes and primary alcohols
10
Identification of types of alcohols
8
Synthesize acyl chloride from aldehyde
9
Is sodium borohydride really a better base than an alcohol?
2
Oxidation of cycloalkenes
0
How is using Jones reagent different than Potassium dichromate in Sulfuric acid for the oxidation of alcohols?