A candidate for "dark matter", predicted and now apparently detected to have both a higher thermal conductivity and higher diffusion rate than H2 is purported in this PowerPoint Presentation file. From that presentation, this output of a Thermal Conductivity Detector (run at 60C) of a HP 5890 Series II gas chromatograph using an Agilent molecular sieve column with Helium carrier gas is puzzling. The Hydrogen peak was establish by a control run. However, in the experimental run there appears a mysterious feature annotated with "???" indicating some sort of gas (that is not Helium) with a higher diffusion rate than Hydrogen. 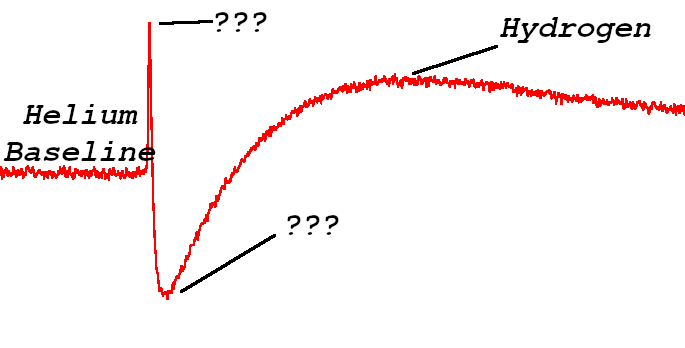 A TCD temperature of 60C was chosen to ensure hydrogen would not show up as a negative peak as indicated by Figure 2 of "Thermal Conductivity Detector Analysis of Hydrogen Using Helium Carrier Gas and HayeSep® D Columns", by K Snavely and B Subramaniam. 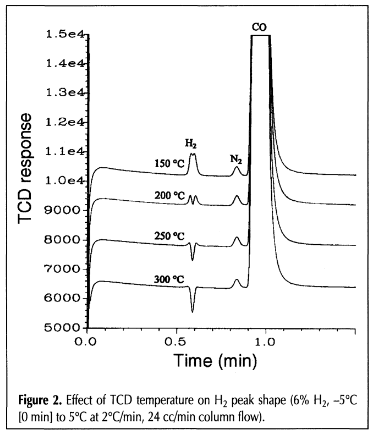 What are plausible candidates for this feature?

For context, here is a control run: 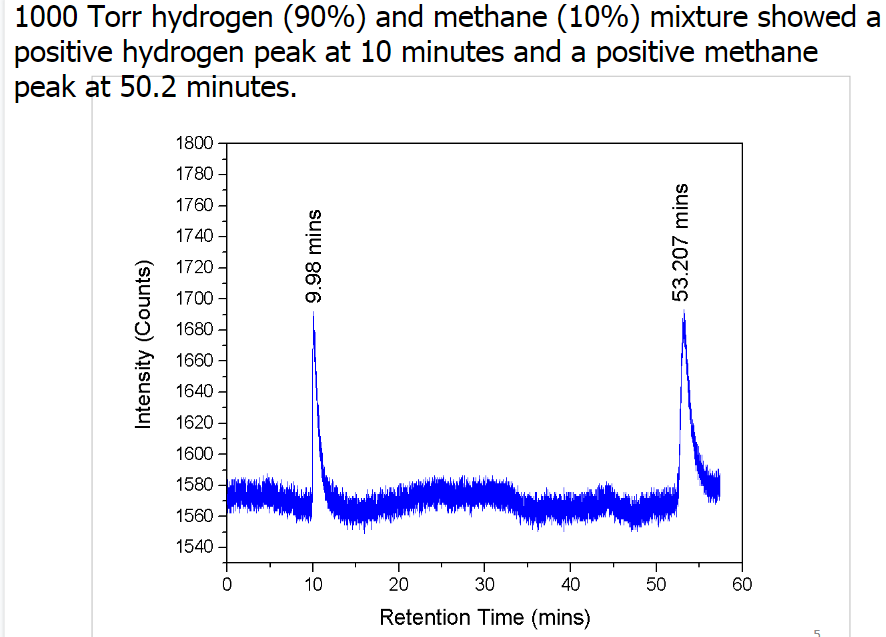 Here is the corresponding experimental run from which the above detail screenshot is taken: 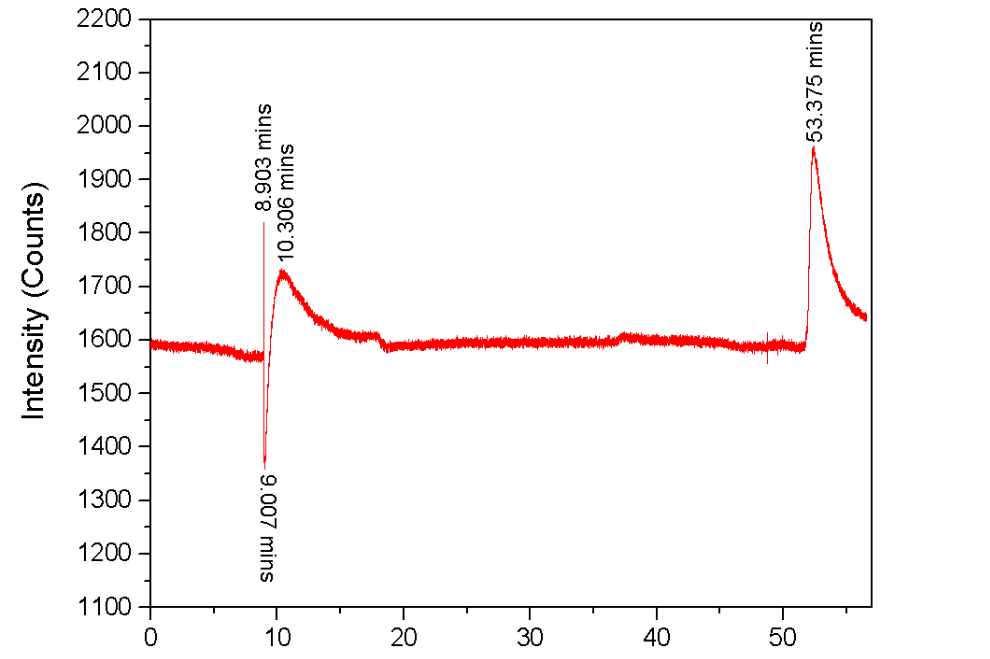 After the reaction, the sealed vessel stood for over 24 hours. This TCD graph obtained. Although a small peak associated with Nitrogen appeared, due to atmospheric ingress to the vessel, the Hydrogen peak no longer exhibited the "???" features: 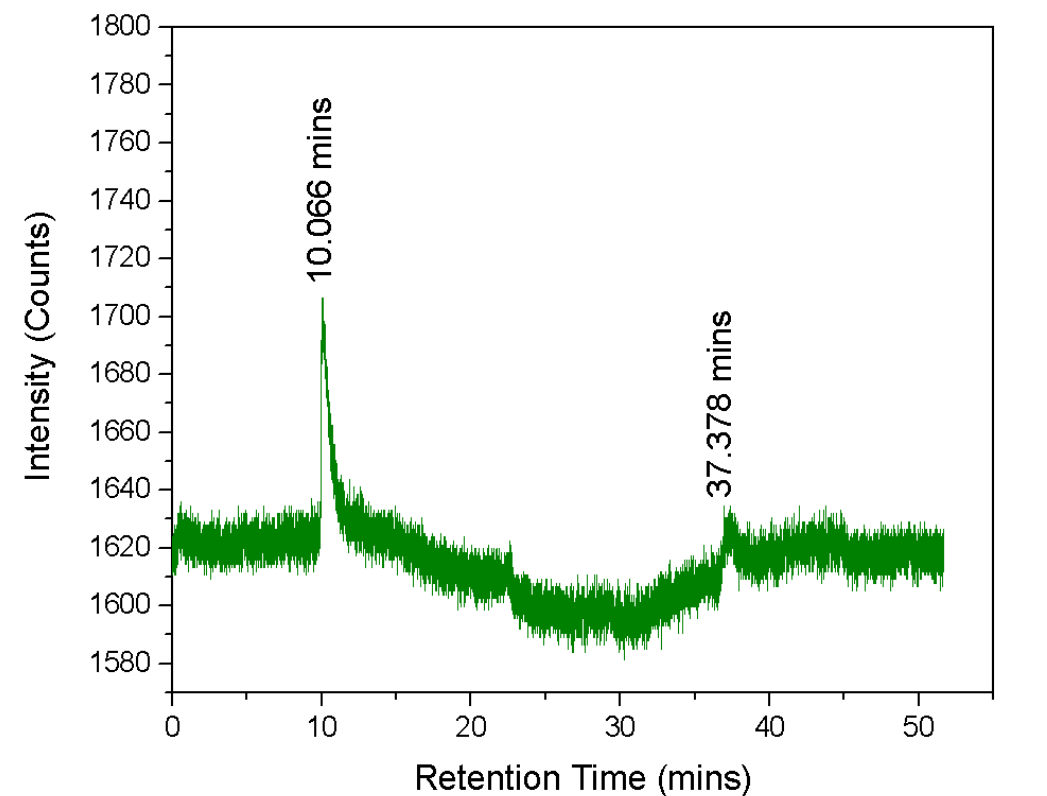 It would be nice to have a full chromatogram rather than a cropped one to see how other peaks look like. The phenomenon of odd behavior of hydrogen with helium as carrier gas with TCD detector in quite well known, but I am not sure if it has been investigated in detail in the literature or not. Hydrogen has higher thermal conductivity than helium. Ideally when you inject $\ce{H2}$, one should see a negative dip as you are seeing. However people also see a split peak. Yours is a mixture of split and a dip. The rest of the peaks should appear normal. If you change the carrier gas, this problem will go away (for $\ce{H2}$) but you lose sensitivity for other analytes as helium has the highest thermal conductivity after hydrogen in gas phase.

If you change the polarity of the detector, you would see this phenomenon for $\ce{H2}$ reverted and other analytes would appear as negative peaks.

One solution for this problem is to operate the detector at higher temperatures, to say, from $\pu{250 ^{\circ}C}$ to $\pu{300 ^{\circ}C}$: You may analyze a known range of hydrogen concentrations using your said method until you find the correct detector operating temperature. To do so, you may need to increase the operating temperature several runs, until the hydrogen peak exhibits normal shape. And ensure it is always in the same direction regardless of $\ce{H2}$ concentration. This newfound detector temperature also ensures high sensitivity because of the higher value.

Not the answer you're looking for? Browse other questions tagged hydrogen chromatography thermal-conductivity or ask your own question.