My teacher insists that we can push electrons either from a bond to an atom's valence, or vice versa. Bond to lone pair; lone pair to bond, he insists.

However, what about bond to bond?

Is there a pedagogical reason he might be avoiding bond-to-bond movement? This is a legal move.

Or does he simply not see bond-to-bond movement as a separate entity; could bond-to-bond electron pushing be construed as simply a bond to lone pair and lone pair to new bond move?

Pedagogically speaking, many classes first introduce the concept of Lewis structures before resonance theory. The lone pairs are very "visible" in Lewis structures and so moving lone pairs before moving bonding electrons around is often a normal progression. But this is a good question to ask your teacher, it could lead to an interesting conversation. 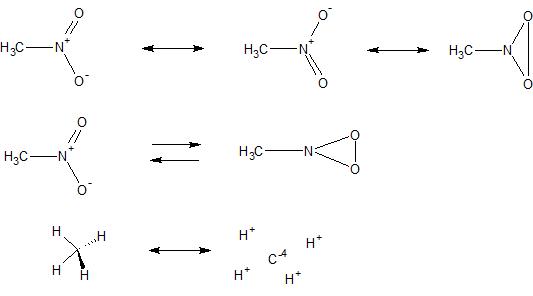 Aside from the don't move atoms rule, everything else is fair game. Look at the resonance structures drawn for methane on the bottom line. They are both valid, but using our chemical "intuition" we would just say that the structure on the right is of such high energy that it doesn't contribute much towards the overall description of methane.

Resonance is a concept that originates from the incapability of the original Lewis structure to describe delocalised systems. The formulation of these resonance structures are a representation of extreme states that are possible. The true bonding pattern lies between all possible resonance structures.

Consider benzene, where we, among others, consider two major resonance structures. In fact the electron structure is well known to be a delocalised $\pi$ system, therefore better described by the right figure.

In this particular case, electrons appear to be "pushed" from one bond to another. This is not the case, as electrons are occupying one (or more degenerate) orbitals the whole time.

So when it comes to resonance structures, there are no clear rules, what is allowed and what is not allowed, however it has to be a possible representation of the actual bonding pattern. Resonance is a mere concept of describing a very complicated bonding pattern in simpler terms.

Not the answer you're looking for? Browse other questions tagged organic-chemistry bond valence-bond-theory or ask your own question.