Why is a 7-endo radical cyclisation favoured over a 6-exo in this synthesis?

Normally, according to Baldwin's rules, 3-exo to 7-exo cyclisations are preferred over endo cyclisations. But in the following example, a 7-endo-trig reaction is favoured over a 6-exo-trig and I am just not able to understand why. It's a real synthesis example (taken from Eur. J. Org. Chem. 2015, 2015 (15), 3240–3250). Please explain to me why the 7-endo product is favoured here. 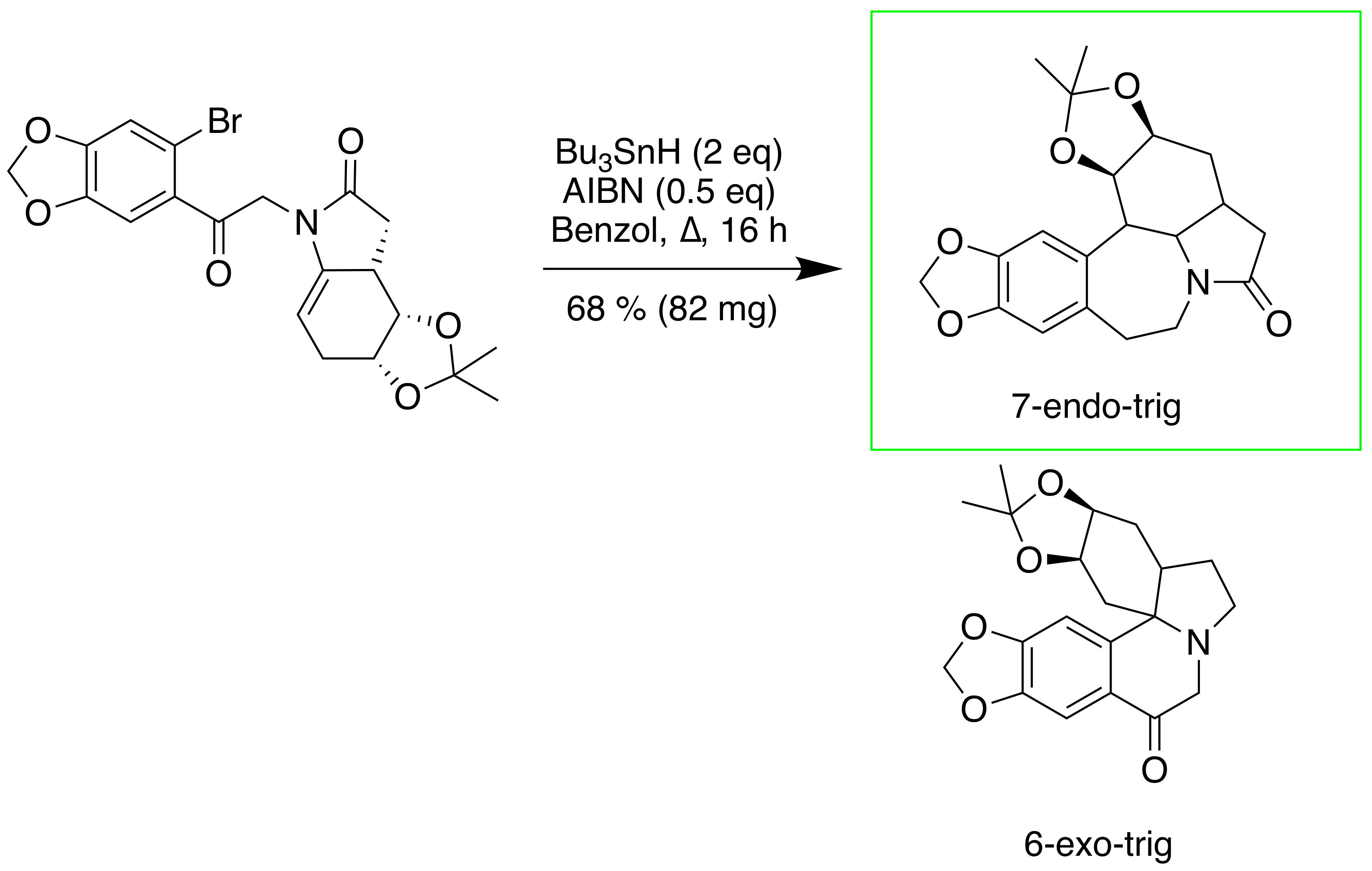 Before make any suggestion for the sought cyclization mechanism, let’s look at some rules and guidelines set by peers in their early studies on radical cyclizations. Specifically, Beckwith and coworkers have set few guidelines for radical reactions, which involves intramolecular cycloaddition reactions (Ref.1). During their kinetic studies on various en-yl radicals (Ref.2), they have shown that hept-6-eny1 radical (1: n = 4; Scheme 1) is able to give both 6-exo-trig and 7-endo-trig products (2 & 3; n = 4; Scheme 1), although 6-exo-trig is the favorable product between two ($k_{exo}/k_{endo} = 5.8$). On the other hand, hex-5-eny1 radical (1: n = 3; Scheme 1) almost exclusively gives 5-exo-trig (2: n = 3; Scheme 1) over 6-endo-trig product (3: n = 3; Scheme 1), although 6-endo-trig is more stable one between two ($k_{exo}/k_{endo} = 48.4$).

Beckwith and Schiesser have performed a theoretical study on the relative rates and the regio- and stereo-chemistry of ring closure of a variety of alkenyl, alkenylaryl, alkenylvinyl, and similar radicals using the method, which involves the application of MM2 force-field calculations to model transition structures (Ref.3). The results show excellent qualitative and satisfactory quantitative agreement with experimental data. The values of both experimental and theoretical data for hept-6-eny1 radical shown to be remarkably close for 6-exo-trig (2: n = 4; Scheme 1) and 7-endo-trig closure (3: n = 4; Scheme 1).

Based on these experimental evidence, it is safe to say, under certain conditions, 6-endo-trig product can predominate over its 5-exo-trig counterpart. For example, Substituents at substituting position disfavors cyclization (e.g, Scheme 2) (Ref.1).

Now we can look at examples where the cyclization goes wild breaking those rules. As part of the generation of radicals in heteroaromatic systems, Dobbes, et al. have studied reactions of radicals at the C-7 position of indole (Ref.4). The synthesis and radical cyclisation of 7-bromoindoles carrying an unsaturated N-alkyl group (7; Scheme 3) has been performed for these studies. The radical cyclisation was carried out using tributyltin hydride and AIBN as the radical initiator in refluxing toluene:

the cyclisation of N-allyl-7-bromoindole (7a) was expected to involve the potential 5-exo-trig cyclisation from the indole C-7 position on to an allyl chain to give 8a exclusively. Yet, a mixture of products was obtained, comprising the 6-endo cyclisation product (9a) and the reduction product (10a) in the ratio of 1:2, but no 5-exo cyclisation product (8a) was obtained. The authors stated that the reason for this mixture is believed to be the constraints enforced on the system by the geometry of the indole ring. Although generally favored under kinetic conditions, the 5-exo cyclisation is very difficult in this case as there is considerable strain and distortion in the five-membered ring product and hence presumably in the transition state. Thus, a significant amount of direct reduction of the indolyl radical is observed in this case (phenyl radical initiated is comparatively unstable and trapping it by $\ce{n-Bu4SnH}$ is comparatively faster (Ref.5)). Although the 6-endo reaction is usually much less favorable in any other situation, the bond angles involved in this situation clearly favor 6-endo cyclisation pathway (Ref.4). Nonetheless, on extending the chain length by a $\ce{-CH2-}$ group, N-(but-3'-ene)-7-bromoindole (7b) has given only the expected mixture of 6-exo cyclisation product (8b) and reduced product (10b) in 1:1.2 ratio, without giving a trace of 7-endo cyclisation product (9b).

Now, it is clear that the sought radical cyclization in Ref. 6 can be directed by circumstances. The authors have the cyclization scheme envisioned as depicted in Scheme 4. They have expected that compound 5 (Ref.6) would be formed under radical cyclization conditions indicated in the Scheme without problem under the accepted Baldwin's rules. However, only 7‐endo‐trig adduct, 13, was obtained in 68% yield. None of expected spiro adduct 5 (Ref.6) was observed under a wide variety of radical cyclization conditions, in addition to $\ce{n-Bu4SnH}$. The authors hypothesized that this outcome may be attributed to the smaller torsional stress of the benzyl methylene group. However, if we look at the structural features more carefully, we can argue that Beckwith’s 2nd rule (Substituents disfavor cyclization at substituted position) may have also been playing a role as well, favoring 7-endo-trig addition, substituted position at which has no additional substituents. Moreover, larger ring size also has ability to adjust conformation in favorable way (Ref.3). 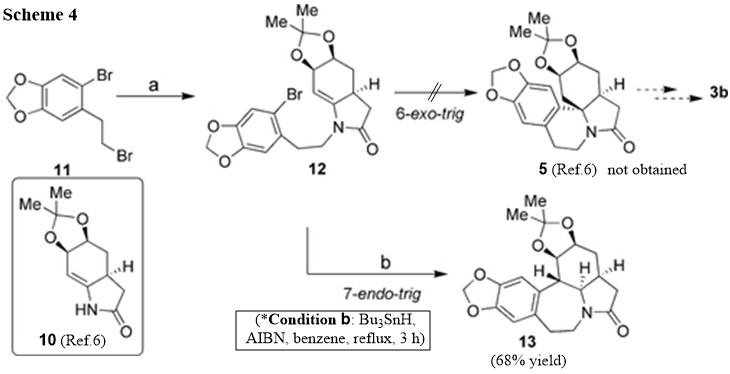 The authors have stated their effort to receive the expected 6‐exo‐trig product as follows:

Calculations (ref) have indicated that the 2‐oxo group has a great influence on the endo/exo selectivity of radical cyclization reactions. To overcome this unfavorable substrate control, a more torsionally strained $sp^2$ carbonyl group was introduced into compound 12, which we expected would favor a 6‐exo‐trig free‐radical cyclization. As shown in Scheme 5, $\alpha$‐bromination (ref) of aryl ketone 14 followed by coupling with enamide 10 gave highly functionalized enamide 15 in 75% yield over two steps. Fortunately, radical cyclization of compound 15 under the conditions used above gave 6‐exo‐trig product 16 in 72% yield.

They really have said "fortunately", indicating more of a luck than their calculations. Yet, more evidence in literature (see list of reference in Ref.6) supporting their argument including Ref.4 listed here.

I'm the co-first author of this paper. I want to thank Mathew Mahindaratne for the helpful and thoughtful discussion. I just want to add one more result when I was doing the synthesis, please see the attached. The beauty of total synthesis is that we never 100% sure what the product we get, but we can always find a way to explain the results.

Not the answer you're looking for? Browse other questions tagged organic-chemistry radicals regioselectivity stereoelectronics or ask your own question.