Why is the volume related to the probability of finding an electron? [closed]

thank you for your time. I was wondering about the correlation between volume and probability of finding an electron.

we know that if we move away from the nucleus, we are going to get less probability of finding an electron. this happens with a 1s sub-level.

But when i want to know ( graphically ) the probability of finding an electrons in a 2s sub-level, then the volume comes up.

he also said that this is true to a certain point, since after that it (volume) starts to decrease.

he then said that the DENSITY OF PROBABILITY is 0 in then nucleus.

what i wrote above it's probably messy. i'm just looking for a better explanation of this concept since i didn't find anything online that talks about density of probability and volume.

You can write that

Here all that's been done is to integrate $\rho(r)$ over a concentric area $4\pi r^2$ surrounding the origin, removing the angular dependence of the density. This works for an s-orbital function with no angular variations in the density.

The $r^2$ factor means that even when the density becomes small away from a nucleus, the total radial probability can be substantial (and reaches a maximum). Inversely, you can have a very high volume density but very low radial probability, for instance at the origin of an s-orbital, where $r^2$ goes to 0.

This is shown schematically (not intended to depict a real H-atom) in the following: 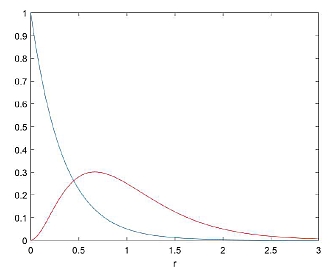 where the red curve illustrates the behavior of g(r), the blue curve of the density.

13
Most probable point for finding an electron in the 1s orbital of a Hydrogen atom
11
What is the difference between ψ, |ψ|², radial probability, and radial distribution of electrons?