Why does depurination happen at a higher pH (or under less harsh conditions) than depyrimidation?

If I had to guess, I'd say that the reason has to do with purine bases (or the local context of the N9-glycosidic bond on purine bases) being less electrophilic, which is why I mention generally lower ionization energies for purines vs. pyrimidines.

"Contrary to previous suggestions, pyrimidine as well as purine deoxynucleosides are subject to base cleavage, the relative ease of thermolysis being 2′-deoxyguanosine > 2′-deoxyadenosine > 2′-deoxycytidine > 2′-deoxyuridine > thymidine."

If my guess regarding the lower electrophilicity of purine bases is true, it's not clear to me, however, why this is the case?

If we look at the four bases (where uracil is just missing the C5 methyl group on thymine) - (http://img.sparknotes.com/figures/7/749a4182b7527e44d289a612e420f40c/dna_bases.gif) - we can notice that the N9 nitrogen connecting purines to their sugars is only ever adjacent to carbon atoms with single- or double-bonds to nitrogen. However, the N1 nitrogen connecting pyrimidines to their sugars is adjacent to a C2 carbon double-bonded with an oxygen atom. Given that oxygen is more electronegative than nitrogen (oxygen has an electronegativity of ~3.44 vs. nitrogen's electronegativity of ~3.04) could this be a hint as to why depyrimidation is much less common than depurination? Are there pyrimidine base analogues with a less electronegative group attached to the C2 carbon, and do depyrimidation rates here match or exceed depurination rates?

This could, of course, be completely off. For example, maybe N7 protonation on purines presents a route to depurination, since guanine having a greater depurination rate than adenine (or lower ionization energy than adenine) is consistent with a decrease in the N7 nitrogen's basicity. Maybe pyrimidines are much less prone to destabilizing protonation. Etc.

My objective here: I'd like to know the "most significant" factor for (and hopefully most general reason for) the greater observed rates of depurination vs. depyrimidation. For example, perhaps the aforementioned oxygen on pyrimidines decreases depyrimidation rates by a factor of two or so (this isn't meant to be an actual guess), but what explains the $\approx 20$ fold difference noted by (Lindahl, 1993)?

Really interesting question!
Mechanism of acid catalyzed hydrolysis of purine nucleosides is known to proceed through unimolecular departure of base moiety(DOI: 10.1021/ja00709a055). 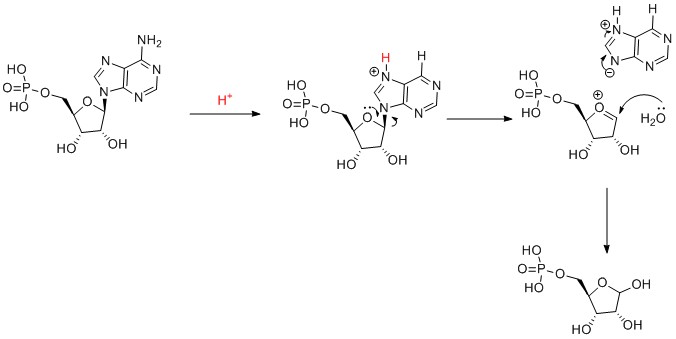 It seems that someone else has also asked the same question: "Why reaction rate with pyrimidines is so much slower?" -and published paper of the reaction mechanism (DOI:10.1039/P29940000309).

In the paper it is suggested that pyrimidines follow different reaction mechanims. This would explain huge differences in reaction rates.

In other words, the structure-reactivity correlations lend additional support to the previous suggestion, according to which the acid-catalysed hydrolysis of 4-oxopyrimidine nucleosides follows an openchain mechanism

Not the answer you're looking for? Browse other questions tagged organic-chemistry reaction-mechanism ph resonance or ask your own question.