How is preparing a buffer possible?

I understand the concept of an equilibrium buffer solution, however I am a bit hung on how creating it doesn't shift the weak acid equilibrium.

If I add in equimolar amounts of $\ce{CH3COO-}$ (from a salt) to the acid, why wouldn't that just push equilibrium to the left, creating a lot more of the acetic acid, as the $ K_\mathrm{eq}$ is very low, thus shouldn't the concentration of acetate ions be always very low (I can understand that it will increase, but wouldn't it be a minor increase as most of added $\ce{CH3COO-}$ react to form acetic acid)? How would it be possible to have almost the same amount of them?

Let's consider a solution of 100 mM acetic acid to start, and adding sodium acetate to 100 mM (without changing the volume) to make a buffer.

If you calculate the acetic acid concentration before and after adding the acetate, it comes out to 98.7 mM vs. 100 mM. For the acetate, you get 1.33 mM vs 100 mM. (All these calculations are to 2-3 significant figures, and assume ideal diluted solutions, which they are not. However, the rough calculation gives you an idea of the magnitude of the equilibrium shift).

Why does the reaction shift so little?

If we look at the concentration of acetic acid, there seems to be very little shift, even though we added an equimolar amount of acetate. The big change (affecting the reaction quotient Q a lot), is due to the change in hydronium ion concentration (almost two pH units, change by a factor of about 70). That offsets the change in acetate, which was increased from 1.33 mM in the weak acid solution to 100 mM (i.e. also a change by a factor of about 70).

So if some concentrations are much smaller (close to zero) than others, small shifts are sufficient to re-establish equilibrium. If all reactants and products are at similar concentration, they will all change appreciably.

I'm a visual thinker. Is there a way to show this graphically?

Abbreviating the concentration of acetic acid with A, that of acetate with B, and that of hydronium ions with H, we can write the equilibrium constant as:

Multiplying by A and taking the negative base 10 logarithm, we get:

Now, we can visualize pKa (blue), pA (orange), pB (yellow) and pH (green). When the blue orange pillar has the same height as the green yellow pillar, the system is at equilibrium. Going from left to right, the graphs show adding 100 mM acetic acid to water before and after establishing equilibrium and adding 100 mM acetate to the weak acid solution, again before and after establishing equilibrium. 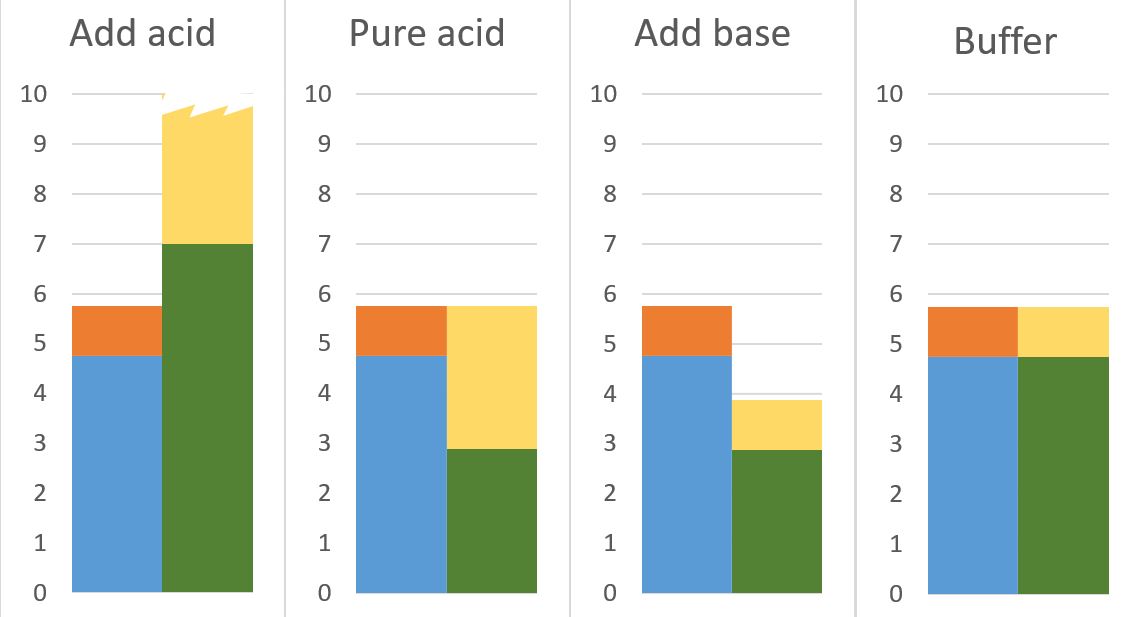