What is the structure of pyrophosphorous acid?

I asked this question here because the answer which I found on web and other resources are inconsistent which each other. For example, following data is given regarding the structure of pyrophosphorus acid in my textbook, which is not consistent with the number of oxygen atoms.

On checking here,and here there are no double bonds of phosphorus with oxygen, however here there are. And here both the structures are given on the same website.

Oxyphosphorus compounds, all of which contain phosphorus-oxygen linkages, are the most dominated subset in Phosphorus Chemistry. You may find good review of oxyphosphorus compounds in Ref.1. In particular, most of these commonly known as phosphates are described in Chapter 3 of Ref. 1 (Pages 169-305) which states that:

The term normal phosphates is used to described the compounds, in which only $\ce{P—O}$ linkages are present (e.g., structures 1a-g). Compounds such as 1b containing discrete $\ce{PO4^{3-}}$ anions are known as orthophosphates. If the neutralizing cation is $\ce{H+}$, then it is called phosphoric acid or orthophosphoric acid.

On the other hand, if some of the oxygen linkages are replaced by other atoms or groups (e.g., $\ce{H, NR2, CR3}$, etc.), the compounds can be termed substituted phosphates. For example, if one $\ce{P—O}$ linkage is replaced by a $\ce{P-H}$ linkage, the compound series are called phosphites (2a) while when the two $\ce{P—O}$ linkages are replaced by two $\ce{P-H}$ linkages, that series is known as hypophosphites (2b). Similar to phosphates, if the neutralizing cation is $\ce{H+}$ in 2a and 2b, then they are traditionally called phosphorus acid (Wikipedia1) or hypophosphorus acid (Wikipedia2), respectively. The IUPAC names of these acids are phosphonic acid and phosphinic acid, respectively. Meanwhile, substituted phosphates containing a single $\ce{P=O}$ linkage (e.g., 2c) are usually referred to as phosphoryl compounds.

When $\ce{PO4^{3-}}$ anions are linked together with sharing oxygen atom in common, they are called condensed phosphates (e.g., pyrophosphate, 3a). If the neutralizing cation is, again, $\ce{H+}$, then it is called pyrophosphoric acid or diphosphoric acid (IUPAC name). On the other hand, one can expect when the two anions linked together with sharing oxygen atom in common are phosphites, they would be called pyrophosphites, 4a (Wikipedia3). However, recent research showed that there are some controversies on the structures, not only on pyrophosphites, but also on phosphite itself.

The $\ce{P(OH)3}$ form of two tautomer is rarely isolated or directly obtained, yet its presence in the equilibrium has been repeatedly postulated from kinetics studies (Ref.3,4) and thermodynamic studies (Ref.5,6).

According to most literature, the $\ce{P(OH)3}$ form of tautomers is possible only in triesters such as 1a $(\ce{P(OR)3})$. Even in such cases, there is a strong tendency to rearrange to the tetracoordinate species, $\ce{RP(O)(OR)2}$ (Ref.5). Hence, it is safe to say that pyrophosphites has high tendency to have a structure resembling of 4a (See first scheme).

Most of the online data banks such as PubChem don't bother with showing proper bond multiplicity since they are focused on searching for the compounds based on connectivity graphs. It doesn't mean that those are bad or unreliable, it's just not their primary focus.

The acid itself can be obtained from the barium salt by via treatment with sulfuric acid. A reaction between phosphonic acid and phosphorous trichloride also yields in diphosphonic acid provided that the hydrogen chloride formed is bound in order to shift the equilibrium:

Synthesized similarly to diphosphonic(III,III) acid from phosphonic acid by treating it with phoshorous tribromide or triiodite instead of trichloride. Another way is oxidation of diphosphoric(II,II) acid $\ce{H4P2O4}$ (aka hypodiphosphonic acid):

Illustrations for Lewis structures are adapted from Abb. 13.6 Sauerstoffsäuren des Phosphors [1, p. 125]. Syntheses and reaction schemes within are from Holleman's Lehrbuch der anorganischen Chemie [2, p. 810]; German text was translated and adapted by me (I tried to get it as close as possible, but no warranty).

In the anhydride, you have the same possibility for tautomerism. I'm not sure which form is the most populated one under which conditions. 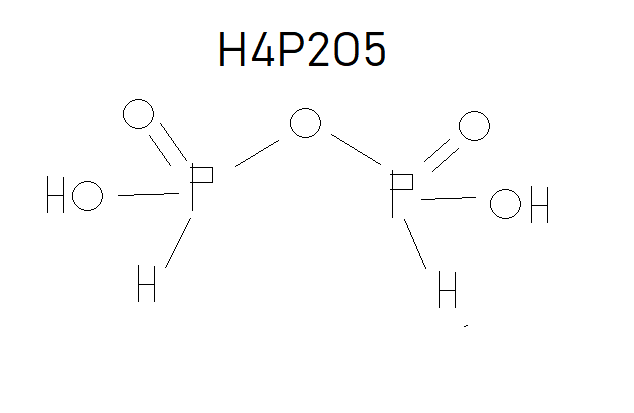 Not the answer you're looking for? Browse other questions tagged inorganic-chemistry acid-base molecular-structure lewis-structure pnictogen or ask your own question.