I have struggled in attaining a solid grasp of the Lewis acid/base concept largely because so many sources seem to offer conflicting definitions.

For instance, Klein's Organic Chemistry mentions that Brønsted–Lowry acids and bases are strictly a subclass of Lewis acids and bases. Other sources say this is true of bases but that a Brønsted acid need not be a Lewis acid and vice versa.

A common example of a non-Lewis acid provided by Wikipedia is $\ce{HCl(g)}$. The rationale being that it has no available empty atomic and/or hybrid orbitals to accept an electron pair (it does have an empty antibonding orbital though — see below).

Another source says hydronium is only a Lewis acid if it is "informally" treated as a hydrogen ion $(\ce{H+})$.

There appears to be further disagreement on whether the adduct formed in the Lewis acid/base reaction is necessarily a product or whether it can effectively appear as a transition-state before splitting apart to give the products. For example, say something like

Other users on this site suggests the approach should be to consider molecular orbitals. I will further note that $\ce{HCl}$ has an empty antibonding orbital so this definition, although arguably the best I can think of, still necessarily conflicts with multiple other sources labeling $\ce{HCl}$ as a non-Lewis acid.

Any help on resolving some of these apparent conflicts would be appreciated.

Moeller's Inorganic Chemistry textbook from 1952 has a fairly long discussion of different theories of acids, citing a lot of primary literature. For Lewis acids, it cites some reviews by W. F. Luder from the 1940's and some of Lewis' original work. Specifically, it says that Lewis in a paper in 1938 (J Franklin Inst. 226:293) described "phenomonological criteria" for Lewis acids and bases, which include the ability to displace weaker Lewis acids and bases.

My impression from Moeller's description of Lewis' work is thus that he defines an acid as a molecule in which one atom has an incomplete valence shell of electrons. He further views a Bronsted acid as a complex between a Lewis acid ($\ce{H+}$) and a Lewis base (the conjugate base). In a reaction like $\ce{NH3 + AcOH -> NH4+ + AcO-}$, he would say that the stronger Lewis base $\ce{NH3}$ is displacing the weaker Lewis base acetate from the Lewis acid $\ce{H+}$.

If I have time, I'll try to dig up some of those primary sources. Here's a quick list if anyone else wants to go after them:

UPDATE: The original 1923 Lewis text is available for free from Google Books here:https://books.google.com/books?id=2hxDAAAAIAAJ&printsec=frontcover&source=gbs_ge_summary_r&cad=0#v=onepage&q&f=false

The most relevant passage is from p.142: 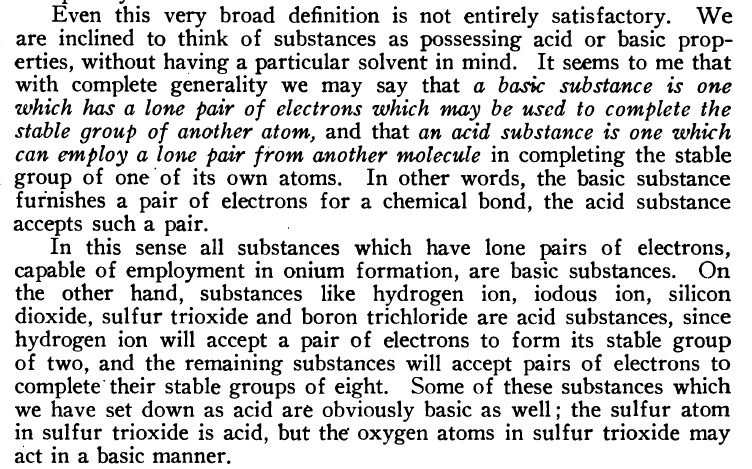 4
Do buffers only work for species of the opposite variety? (I.e. weak acids buffer strong bases and vice versa)
2
Lewis base strength and the hydrogen proton
4
Stability of Sulfides - backbonding?
2
Why does strong Lewis acid-strong Lewis base interactions prevail over hard-soft acid-base interactions?
8
Is there a terminology contradiction about whether the conjugate of a strong acid is a "weak base"?
2
Group 15... Lewis Acid, Lewis Base or Not At All?