What happens during Glycolysis? [closed]

Ask Question
Asked 11 months ago
Active 11 months ago
Viewed 126 times
1
$\begingroup$
Closed. This question is off-topic. It is not currently accepting answers.

Can I get brief explanation of the reactions that occur under Glycolysis? What do the curved lines represent? 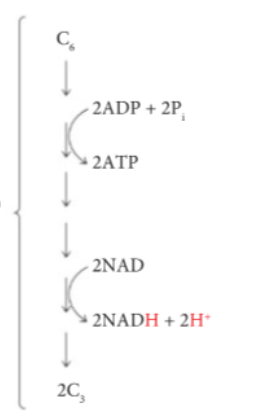 Glycolysis is a process of which converts Glucose(Described as C$_{6}$ in your diagram), to two Pyruvate (2C$_{3}$). Then in downstream of glycolysis, Pyruvates are then converted to AcetylCoA to be used for many things in body. Glycolysis is part of a metabolic pathway, and in total it uses 1 Glucose, 2 ATP, 2 NAD+ to produce 2 Pyruvate, 4 ATP and 2 NADH. So those curve lines represents the Total input and output of energy. Each step is facilitated by different enzymes, so you could search for enzymes in each step for more information about each reaction. Wikipedia has table of each reactions.

What do the curved lines represent?

This is a schematic diagram of glycolysis where the metabolites are shown on the left side and the cofactors on the right. Intead of writing a reaction $\ce{A + B -> C + D}$, you can write it as $\ce{A -> D}$ with a curved arrow indicating that B is also a reactant and C is also a product.

Can I get brief explanation of the reactions that occur under Glycolysis?

49
Why does menthol (e.g. peppermint) feel cool to the tongue?
4
What happens to the NADH produced by lactate oxidation?
1
What is a triglyceride?
4
Which chemical reactions occur between my tongue and the food I eat?
5
How is it that fructose has a different metabolic pathway than glucose but yet glucose is converted to fructose?
4
Which steps are most critical in driving glycolysis foward?
1
Why does adding a charged group to an organic molecule decrease its stability?
21
Why do some chemical reactions require many steps?