According to my book, the following line was given relating to the bond angle in Group 15 elements

The bond angle in PH3, AsH3 and SbH3 is close to 92° which suggests that the orbitals used for bonding are close to pure p-orbitals.

I wanted to ask if there is any reason for having sp3 hybridised orbitals for N, but not so for other elements of that group in their hydrides. Or is it completely based on experimental observations?

The answer to this question is actually much more complicated than most textbooks make it seem. There's a great explanation in Abright, Burdett and Whango "Orbital Interactions in Chemistry" Ch. 9, which I'll try to summarize here. 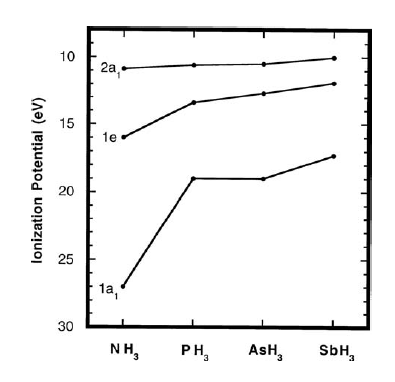 The key point here is that more $s$ character is mixed into the lone pair orbital as you move down from NH3.

I would recommend you read Linus Pauling’s Nature of the Chemical Bond, an excellent book for VBT.

Basically, the reason for hybridisation is to increase bond strength, which is maximised at 2 when one has 25% s and 75% p character.

Case in point- the lone pairs in water have 44% s character, while the bonding pairs have 6% each.

To answer your question, nitrogen is much more electronegative than hydrogen, so the interaction is somewhat ionic. Hence, the bond angle increases just like in water- the predicted bond angle for water would be about 90 degrees, but that is obviously not the case.

At the end of the day, VBT is much more complex than one might think if one learns it in organic chemistry.

3
sp2 hybridization Group V elements
0
What are the height and width of the large and small nodes of the sp3 hybridized orbitals of carbon and silicon?
10
What type of bonding is there among d-block metals?
28
What is Drago's rule? Does it really exist?
4
Reducing character of group 15 hydrides
12
Mathematical relation between bond angle and fraction of s or p character
0
Why does SiH4 have unusually large bond angles?