I figured I’d study $\ce{C2O4^2-}$ as an organometallic ligand, and found that it is weak field (pi donor). I hence decided to construct a MO diagram.

The oxalate anion is of D2h symmetry, so one can immediately use that, form irreducible representations and find the C-C orbitals: 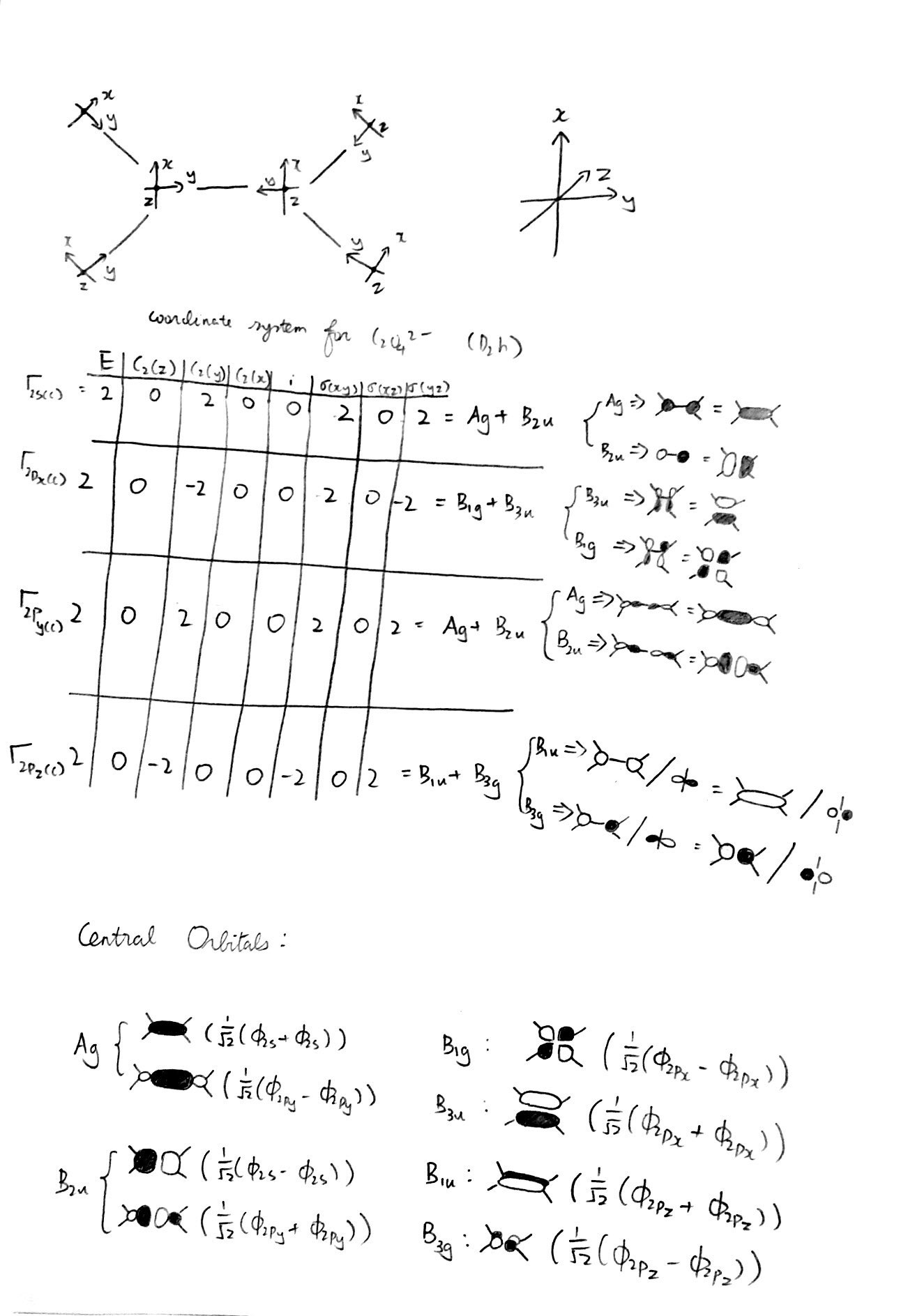 Following which, I tried to use projection operator to look at all the group orbitals. 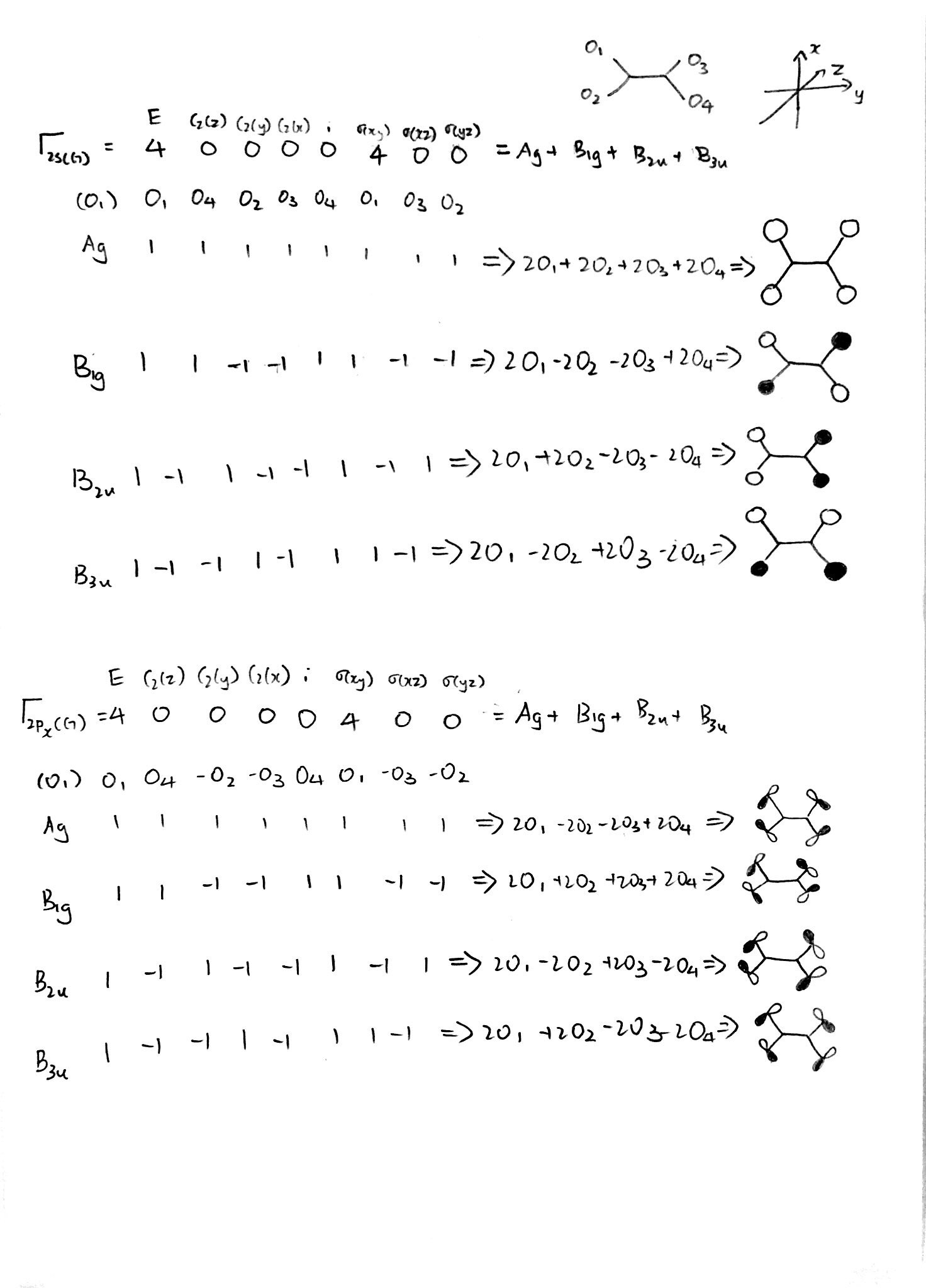 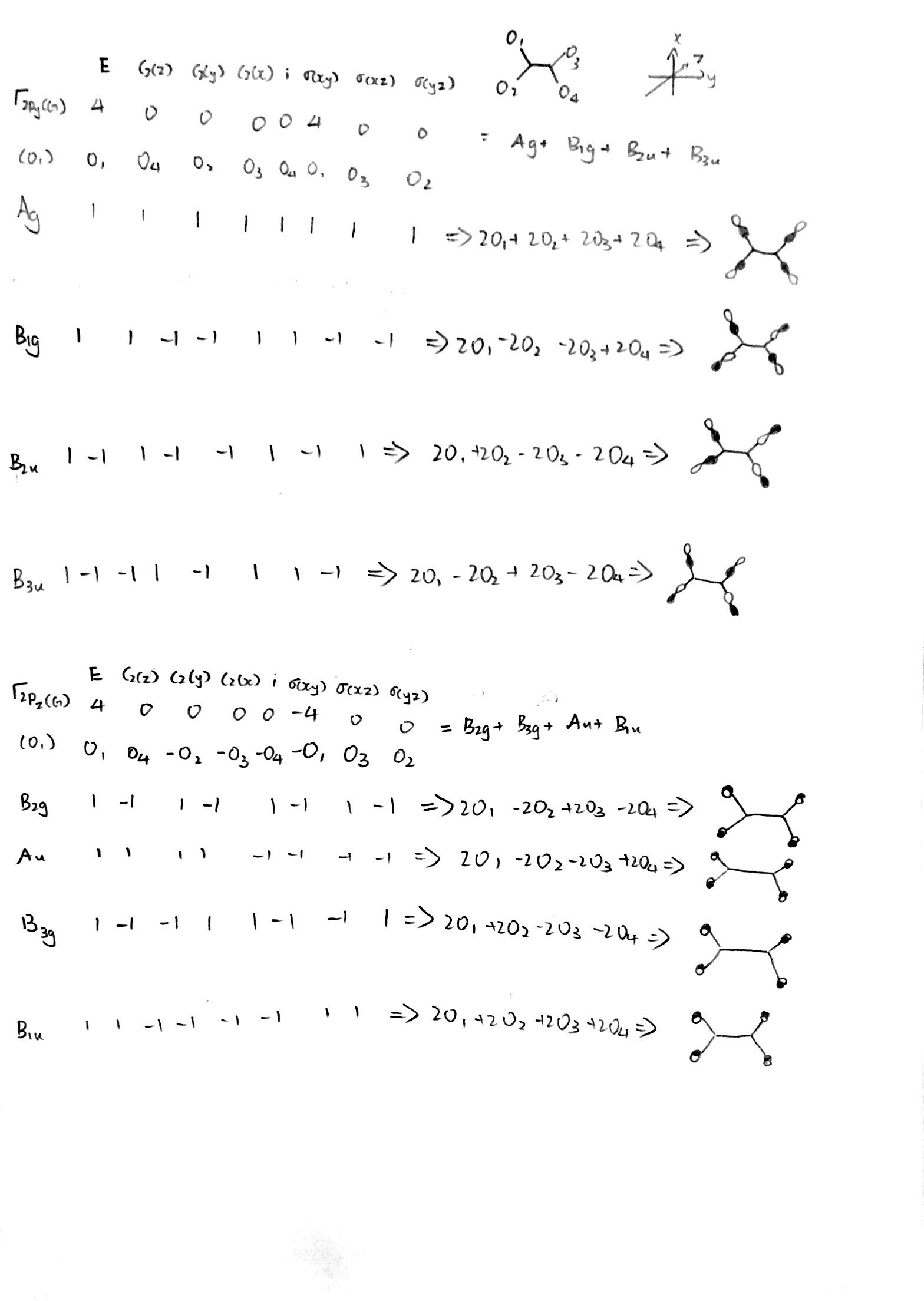 Unfortunately, this means that there are a lot of orbitals with Ag and B2u symmetry, and a couple with B1g and B3u symmetry. How would these orbitals interact?

Here's how I would approach it. I would start by making some (over)simplifying assumptions:

1) O $p_x$ orbitals are mostly nonbonding, so I'm going to ignore interactions of those orbitals with carbon orbitals

3) Same for the O $p_y$ and $s$ orbitals. In this case, the mixed $sp$ orbital with its large lobe oriented away from C is mostly nonbonding, so I'll ignore interactions of it with carbon orbitals

With those assumptions in place, I focus on building and ordering the occupied molecular orbitals. The highest energy occupied orbitals will be some of those oxygen-based nonbonding orbitals, so let's start by putting all eight of them at the top of the diagram. The relative energy levels among them will be affected by the number of positive and negative interactions, so the highest energy one will likely be the $b_{1g}$ where all of the $p_x$ orbitals have anti-bonding interactions with their neighbors. I mention this orbital in particular because it is the HOMO, and I think that the $\sigma$ interaction between oxalate and a metal center would come from the interaction of this orbital with the metal $d_{x^2-y^2}$ or $d_{xy}$, for example.

Mixed in with the $p_x$ and $sp_y$ nonbonding orbitals will be the two $\pi_{nb}$ orbitals, also centered on the oxygens. These are the $b_{2g}$ and $a_u$ orbitals in your set above. Since there isn't a carbon $\pi$ orbital with the right symmetry to interact with either of these, the resulting MO's have a nodal plane aligned with the C-C bond. These are the orbitals that will have $\pi$ interactions with a metal center if the oxalate is acting as bidentate ligand.

At the bottom of the occupied orbitals, we have the five primarily $\sigma$ orbitals. I think the highest energy of the group is the $\sigma_{C-C}$ formed from the mixed $sp_y$ carbon orbitals oriented towards each other, ie a mix of the two $a_g$ central orbitals. Since the density is primarily between the carbons, I'm going to ignore the interactions with the O orbitals.

Not the answer you're looking for? Browse other questions tagged molecular-orbital-theory carbonyl-compounds or ask your own question.