In this experiment, I used a digital temperature probe to measure the freezing point of water and some other salt solutions. 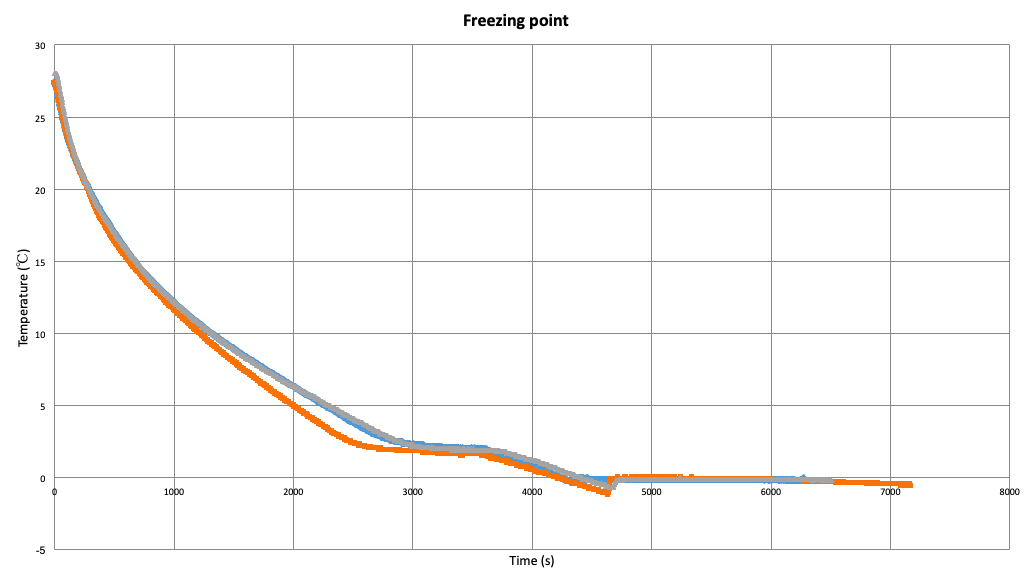 I was just wondering if there was any explanations for 1. The first plateau and 2. The dip in temperature right before the freezing point. (2.) can be observed for other salt solutions.

I think that the dip before the freezing point is caused by the formation of ice needing a 'nucleation point', which requires the temperature to be much lower such that a regular structure can be formed. I have no good explanation for 1. but it could be due to uneven cooling or some sort of issue with the probe.

Please give some suggestions that explains 1. and 2. if possible, even if you are unsure. Thank you for the help!

First, it looks like you supercooled water. This at least explains the dips in temperature below zero degrees Celsius. It is not difficult to supercool water up to a few degrees below the normal freezing point. It remains metastable provided you avoid perturbing it, say by shaking. See for instance: http://www1.lsbu.ac.uk/water/supercooled_water.html. And yes, availability of nucleation points (small crystals) accelerates freezing.

The plateau observed around $\pu{2^\circ C}$ may be due to density differentials across the sample. At about $\pu{4^\circ C}$ water reaches its maximum density. Above this temperature, the colder water at the surface sinks, creating convection currents and accelerating the cooling process. As you dip below about $\pu{4^\circ C}$ the convective currents cease (around 3000 s), since the density gradient is stable: colder, less dense water is at the top. The water at the top of the sample continues to cool and decrease in density without sinking. If the thermometer is placed away from the air interface, it should at this point measure a slowly changing temperature as the temperature gradient toward the interface builds up. The temperature behavior will be a response to heat diffusion instead of heat convection.

You may gain additional information if you add a little dye near the thermometer and attempt to follow its movement, either before or after the convective behavior is presumed to have stopped. Convection should result in mass flow, mixing the dye more rapidly. In the diffusion regime dye should disperse more slowly and locally.

This discussion makes various assumptions of course with regard to the purity of the water and the geometry and insulation of the container it's in. It also assumes that the water has not frozen at all before about 4800 s. It also makes assumptions about the location of the thermometer.

3
Good choice for heat-conductive coil submerged in sea water
8
Predicting melting points of substances based on their molecular/atomic structure
13
Justification for Freezing Point Depression & Boiling Point Elevation in Solutions?
13
Why does ice crack when a drink is poured on it?
35
Which “exotic salt” can lower water's freezing point by 70 °C?
3
Where does the energy come from to lower the temperature of a brine solution?
6
How Would A Vast Mixture (Like an Ocean) of Ammonia-Water Behave in Terms of Evaporation and Freezing?
1
Freezing Point Depression and Temperature Decrease