Product of oxidation of alkanes

I'm trying to find the product of the oxidation of iso-butane using KMnO4, i know that alkanes undergo step wise oxidation with strong oxidising agents to finally give carboxylic acids.. With straight chain carbons, its very straightforward - ethane becomes acetic acid etc. But with branched chain alkanes I don't know how to proceed. Can someone tell me if there's a general rule for oxidation of alkanes- to get the product?

Yet, as most of the viewers already commented, I also believe $\ce{KMnO4}$ does not oxidize alkanes, except in following situations:

It is also important to note that when the benzylic carbon is a $3^\mathrm{o}$-$\ce{C}$ (e.g., corresponding alkyl groups such as $-\ce{C(CH3)3}$ group in tert-butylbenzene, see the example given in RHS of Scheme 1), the oxidation reaction does not happen.

In addition to benzylic carbons, $\ce{KMnO4}$ also oxidizes weak $\ce{C-C}$ bonds such as $\pi$-bonds in alkenes and alkynes (Scheme 2):

At last, as mentioned above, conditions of the reaction can be adjusted such a way that desired compound can be achied in high yields. For example, see following example (Ref.1): 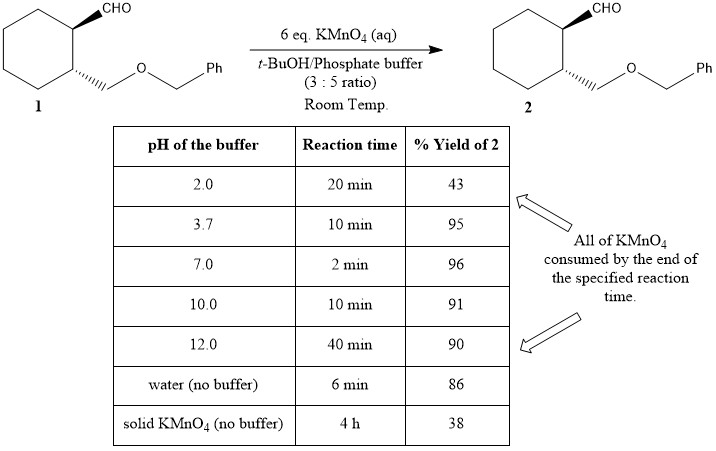 Note that no benzylic carbon or -$\ce{OCH2}$- was oxidized here.

Although tertiary $\ce{C-H}$ bond in isobutane (preferred IUPAC name: 2-methylpropane; $\ce{CH3CH(CH3)CH3}$) is relatively weaker than othe alkane $\ce{C-H}$ bonds, I’m highly skeptical of the statement of “Oxidizing agents such as potassium permanganate readily oxidize a tertiary hydrogen atom to a hydroxyl group, e.g., isobutane is oxidized to t-butanol.” (vide infra). To my knowledge, the literature evidence for that type of oxidation reactions does not exist. Nevertheless, 2-methylpropane (isobutane) can be oxidized to 2-methylprop-2-ol (t-butanol) by reacting supercritical-phase isobutane with air in the presence of a catalyst such as $\ce{Pd/C}$ at high temperature, Instead of using $\ce{KMnO4}$ (Ref.2):

Abstract: tert-2-Butyl alcohol can be synthesized efficiently on $\ce{SiO2 –TiO2}$ or $\ce{Pd–C}$ catalyst if air is directly introduced to the supercritical-phase isobutane.

tert-Butanol (TBA) is the initial material in methyl tert-butyl ether (MTBE) production and methyl methacrylate (MMA) synthesis. MTBE is high-octane-number gasoline additive and MMA is a resin material for plastic synthesis (e.g., PMMA or poly-methyl methacrylate). Thus, one would have wondered why scientists did not attempted to synthesize TBA in a such an easy way like using $\ce{KMnO4}$.

However, in a different note, almost exclusive $\ce{C-H}$ bond activation has been observed in the reaction of linear and branched alkanes with $\ce{CeO2+}$ (Ref.3)

"Oxidising agents such as potassium permanganate readily oxidise a tertiary hydrogen atom to a hydroxyl group, e.g., isobutane is oxidised to t-butanol."

3
Oxidation of Carbon atom in Alkene, Alkyne and Alkanes of functional groups?
4
Why are alkanes 'non-polar'
2
Wurtz reaction on acidic alkanes
1
Reactivity of Alkanes
5
Synthesis of branched alkanes