In general, more substituted alkenes are more thermodynamically stable. However, in certain cases such as enamine alkylation, the less substituted double bond is favored. How do we know that which is favored during a particular reaction? Can we have a generalized rule for it?

I'll address your concerns about alkene stability in general and enamines in particular. It is useful to examine the acyclic permutations of C6H12. The heat of formation of these isomers is a good measure of their relative stability. As the double bond is increasingly substituted with alkyl groups, the heat of formation becomes more negative, i.e., more stable. Tetrasubstitution is better than trisubstitution which is better than disubstitution. Clearly, monosubstitution is the least desirable case. The stabilization by alkyl groups in this case is due to the hyperconjugation of the bonding σ-CH orbital and the anti-bonding π*orbital. The more opportunities for this interaction, the more the stabilization. Heats of formation are available at the NIST site. 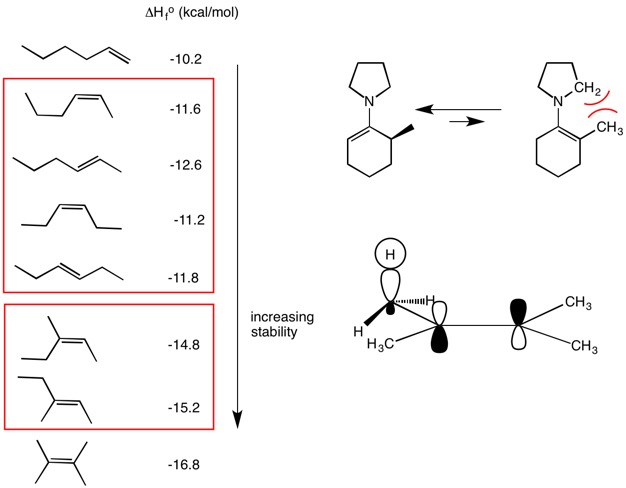 I'm not sure where the alkene is during enamine alkylation. I can only see an alkene in the enamine starting material, so I will try to explain the alkene formation selectivity for enamine formation.

Not the answer you're looking for? Browse other questions tagged organic-chemistry carbonyl-compounds enolate-chemistry or ask your own question.