I just came across the following problem about alkaline ester hydrolysis: 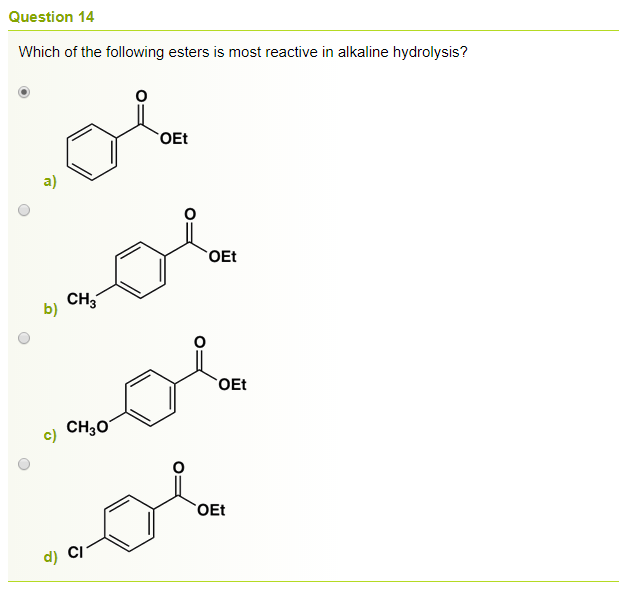 Since I knew that chloro groups are ortho-para directors in electrophilic aromatic substitution, I also concluded that the chloro group also donates electron density (as shown below) and should also be less reactive at the carbonyl group than the non-substituted benzene ester, which I concluded to be the most reactive compound.

However, the answer key says that the p-chloro compound is the most reactive due to its electron-withdrawing abilities (which should be through induction only).

However, wouldn't those effects be minimal in comparision to the conjugation effects, or does the large nature of chlorine's 3p orbital vs carbon's 2p orbital make conjugation mininmal?

Clearly, you have not read benzene halogenation before. In the electrophilic substitution of halogens in a benzene ring, the halogen, taking Cl for example, deactivates the ring precisely because its inductive effect of withdrawing electron density from the benzene ring outweighs the resonance effect of Cl donating its lone pair into the ring. It is experimentally proven that chlorobenzenes are less reactive, and you can understand the reason why inductive effect outweighs the resonance effect as the Cl atom, being highly electronegative, is "not willing" to readily donate its lone pair of electrons into the ring; High nuclear charge causes Cl atom to hold tightly to its valence electrons, thus they are not available for donation. Also explains why Cl- ion is a weak conjugate base and weak nucleophile.

0
Basicities of meta-nitrophenoxide and para-nitrophenoxide
5
Order of reactivity of carbonyl compounds towards nucleophilic addition
2
Effects of Groups on the Nucleophilcity of Nitrogen
21
Are there any examples of activating meta directors?
9
How does conjugation affect reactivity?
18
The effect of the groups at para position on SN2 reactivity
1
Is the phenyl group in benzophenone electron donating/withdrawing?
1
Which oxygen in ester group is more nucleophilic?