Are risks (hexavalent chromium) during Chrome plating temporary, or remain with the product?

Since some chrome plating production processes generate hexavalent_chromium compounds, which are reportedly highly toxic/carcinogenic, I wonder:

Do the hexavalent chromium substances only occur (temporarily) during the production process (i.e. the chrome plating) or will they remain with the product?

My naïve impression has been that after the chrome plating process is over, the product will have an additionally a more or less thick layer of native Cr. Is this correct?

Should I expect impurities or residuals of toxic forms (e.g. hexvalent chromium) to be with the chrome plated this is possible do primitive test exist to detect product?

If it is possible that the chrome plated object could have worrisome concentrations/amounts of Cr(IV), is there a primitive test to detect this?

Update Some internet resources, such as tests/detection procedures for Cr(IV) described here, mention

The screening method can be used to determine chromium(VI) in passivation layers on metal pieces.

both giving reason to thing that the Cr (VI) might remain in worrisome amounts after the chrome plating. True.

one of the answers mentioned that "chrome plating", being understood as a general term, does not necessarily imply which material is being plated. If permissible I would like to add that I am most interested in those risks of the base material being copper.

The most upvoted answer has stated little risk if chrome plating procedure is carried out well. 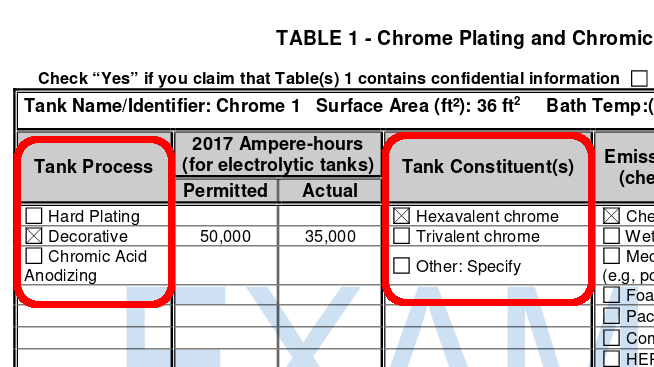 This information to raises the aspect, if the outer passivated layer should be expected to have only Cr(III), irrespective of the used tank constituents.

Multiple questions should be broken in multiple items, but anyway,

If your plating process is well done, and everything is thoroughly cleaned after, the level of Cr(III) or Cr(VI) remaining should be low enough to be inconsequential to health and the environment. You're correct stating that regardin chrome, thre will be only a passivated layer of metallic chromium and not the trivalent or hexavalent.

Please do remember that the main reason that chrome plating makes things resistant to corrosion is that as soon as chromium is exposed to air, it forms a very thin layer of chromium oxide attached to the surface of the metal, preventing further corrosion. So, in fact, there is some Cr(III) on a finished piece of chrome plated material.

We aren't considering the environment were the finished part will be exposed/used. If aggressive enough conditions are present, the chromium layer will be corroded away and will enter the environment as Cr(III)/Cr(VI).

Regarding Cr(VI) detection, there is a "simple" method involving a solution of diphenylcarbazide described at https://www2.mst.dk/udgiv/publications/2009/978-87-7052-987-7/html/kap04_eng.htm

However, one can easily buy test kits for Cr(VI) on Amazon, ready for use, starting at about (February 2019) USD 110.

If we assume that the plating process was done correctly onto tin then according to a XPS study on a chromate conversion layer on tin plate (J. Sun et. al., SURFACE AND INTERFACE ANALYSIS, 2009, volume 41, issue 6, pages 449-452) the conversion layer is a combination of mainly chromium(III) oxide, chromium(III) hydroxide, tin and tin oxides.

However in a study on a chromate conversion layer on zinc, it was found that much of the chromium was still present in the form of chromium(VI). The paper in question was X. Zhang et. al., SURFACE & COATINGS TECHNOLOGY, 2005, volume 197, issue 2-3, page 168-176.

Now this suggests that chromium(VI) is present in the films, I know that the chromium in soil can change from one oxidation state to another. If the soil is alkaline and MnO2 is present then it is possible for chromium(III) to be converted into chromium(VI). I think that the question suffers from the problem that we do not know what the metal is under the chromate conversion coating , also we do not know what environment the object is kept in. I think we know too little to be able to give a perfect answer.

In a study on chromate conversion layers on aluminium, it was found that soaking a film in sodium chloride caused chromate to be leached from the layer. This was published by J. Wan, Physica B, 1995, volume 208, issue 1-4, pages 511-512.

So I think it is possible for chromate to be released.

3.1 The chromium reaction with diphenylcarbazide is usually free from interferences. However, certain substances may interfere if the chromium concentration is relatively low. Hexavalent molybdenum and mercury salts also react to form color with the reagent; however, the red-violet intensities produced are much lower than those for chromium at the specified pH. Concentrations of up to $\pu{200 mg/L}$ of molybdenum and mercury can be tolerated. Vanadium interferes strongly, but concentrations up to $10$ times that of chromium will not cause trouble.

3.2 Iron in concentrations greater than $\pu{1 mg/L}$ may produce a yellow color, but the ferric iron color is not strong and difficulty is not normally encountered if the absorbance is measured photometrically at the appropriate wavelength.

The other issue I have with the test is its use of ethanol as a solvent to prepare diphenylcarbazide solution. However, major theory of the test is $\ce{Cr(VI)}$ would oxidize diphenylcarbazide to diphenylcarbazone, which would produce a red-violet color. But, it's a known fact that ethanol itself would get oxidized by $\ce{Cr(VI)}$. For example, $\ce{K2Cr2O7}$ would oxidize ethanol at $\pu{25 ^oC}$ with rate $K_{\mathrm{obs}} = \pu{0.193 min^{-1}}$ (pseudo-first-order kinetics; Ref.1). Don't you think it would (negatively) interfere as well? Other than that, this is a good test for quick determination of the presence of $\ce{Cr(VI)}$.

Not the answer you're looking for? Browse other questions tagged inorganic-chemistry metallurgy toxicity or ask your own question.