$\text{DiBAl-H}$ reduces by electrophilic attack and provides hydrogen by $\text{H}^-$ transfer. Unlike $\text{LiAlH}_4$ it does not directly provide $\text{H}^-$ ion. So it should not undergo acid base reaction with carboxylic acid. But my friend argued that it undergoes acid base reaction. I can't find any reaction mechanism for reduction of carboxylic acid with $\text{DiBAl-H}$, can someone propose a mechanism for it?

Reduction of esters of carboxylic acids directly to aldehydes is of great synthetic interest. Zakharkin and Khorlina in 1962 (Ref.1) has shown that, diisobutylaluminum hydride (DIBAL-H) could be very useful in reducing esters to aldehyde in high yields at low temperatures (about $\pu{-70 ^oC}$). They also found that solvents affect reduction significantly. For example, the reduction reaction in toluene or hexane proceeds to give corresponding aldehydes in yields l0-15% more than those in ether as the solvent. Previously, in 1959, Miller et al. (Ref.2) found that DIBAL-H is a more selective reagent than lithium aluminum hydride in the reduction of nitriles to aldehydes, and it can also be used to reduce benzoic acid to give 72% yields of benzyl alcohol (they also showed esters can be reduced to corresponding alcohols). The conditions and yields of these references are summarized in this page. In Ref.2, during acid reduction, Miller et al. have used 3 equivalents of DIBAL-H and observed that a gas (hydrogen) evaluation upon the addition of the hydride to benzoic acid until one mole of the reducing agent had reacted. Thereafter, the addition of more DIBAL-H gave no gas. Thus, the first reaction is, presumably an acid-base reaction. However, DIBAL-H here should be acting as a Lewis-acid instead of a base, as illustrated in scheme 1:

The ist mono-adduct, then further reacted with second DIBAL-H to give di-adduct, which upon acid hydrolysis would give expected aldehyde (Scheme 2): 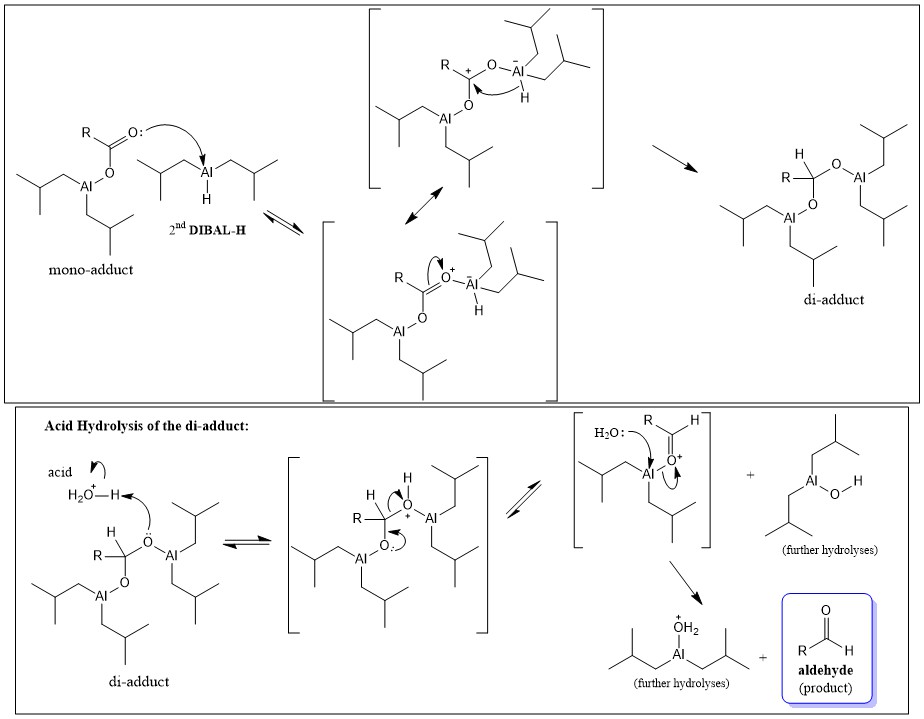 At lower temperatures (around -78oC), carboxylic acids (with 2 equiv. of DIBAL-H) is reduced by DIBAL-H

6
On the use of hexane in the organic reduction by DIBAL-H
7
Does DIBAL-H reduce carboxylic acids?

3
Is this the correct mechanism of the formation of the nitronium (NO2+) ion from sodium nitrate and sulfuric acid?
18
Fehling's test arrow pushing mechanism
7
Does DIBAL-H reduce carboxylic acids?
0
2 problems with elimination-addition of halobenzene using NH2-
7
Electrophillic susbtitution of bromine on styrene and cinnamic acid in the presence of FeBr3, a Lewis acid