Rationalising the reactivity of phosphoryl chloride

$\ce {POCl3}$ is a reagent well-known for enacting various functions in organic synthesis. For example, together with pyridine, it is able to dehydrate alcohols to give alkenes. Also, reacting it with a substituted amide gives chloromethyleneiminium ions. Salts containing these ions are also known as Vilsmeier reagents and they have great practical use in synthesis. The above two reactivity patterns seem to suggest that $\ce {POCl3}$ reacts with oxygen atoms containing rather high electron density, such that such reactions with other carboxylic acid derivatives at the carbonyl oxygen is not really observed. Firstly, I would like to ask if my rationalisation of its reactivity here is correct.

Also, as suggested by the same site, $\ce {POCl3}$ is also able to perform the halogenation of alcohol, in a manner similar to how $\ce {PCl5}$ performs the reaction, but only in the presence of dimethylacetamide (DMA) or dimethylformamide (DMF). Why is that the case? What particular properties of the solvent allow the transformation to be effected?

AFAIK it's not a particularly common choice, but Vilsmeier reagents are sometimes used to convert alcohols to chlorides (see e.g. Tetrahedron Lett. 1992, 33 (34), 4901–4904). This explains the requirement for DMF/DMAc as solvent.

A reasonable mechanism is as follows: 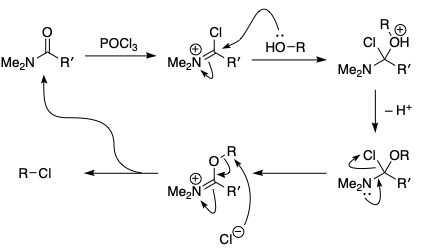 Not the answer you're looking for? Browse other questions tagged organic-chemistry reactivity organophosphorus-compounds or ask your own question.

26
Rationalising the order of reactivity of carbonyl compounds towards nucleophiles
1
Reactivity of Alkanes
5
What is the difference between a phosphoryl group and a phosphate group?
5
How is phosphoryl chloride attaching an aldehyde to benzene?
6
How can the trityl tetrafluoroborate function as a Lewis-acid catalyst
2
Reactivity of Ammonium