Is this textbook bonding picture of hybridization in ethene wrong? 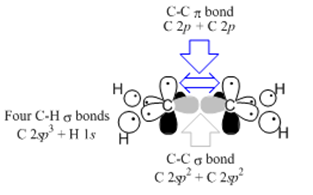 Regarding the above picture, why is the $\ce{C-C}$ $\sigma$ bond composed of two $\ce{sp^2}$ orbitals while the $\ce{C-H}$ $\sigma$ bonds composed of $\ce{sp^3}$ hybrid orbitals? I don't see why; I thought the geometry around the carbons was trigonal planar. Why does hybridization differ across atoms in the molecule?

EDIT: Saw this in another text:

hybridization erratum
Share
Improve this question
edited May 21 '15 at 23:45

You are not mistaken. Your book is wrong. If one desperately wants to involve the hybridisation concept (which makes sense for carbon), then the description should be in accordance with the molecular geometry of ethene:

However the concept of hybridisation is no law, but yet another tool to describe bonding. In case of methane, (ethane,) ethene and ethyne it is quite simple to come to certain $\ce{sp^{x}}$ hybrid orbitals where $\ce{x}\in\mathbb{N}$ - different molecule may lead to fractional $\ce{x}$. (Not a rule, just a guideline)

The coordinate system is chosen arbitrarily to indicate the molecular plane to be $xy$, as indicated in the picture taken from the german article of wikipedia:

As the π orbitals have to be perpendicular to this plane they only can be composed of $\ce{p_{z}}$ orbitals.

Martin has provided an excellent answer to your question. And although I've arrived late at the party I'd like to comment on the hybridization in ethylene. All of the introductory texts I've come across use the same bonding description as your text: the carbons in ethylene are hybridized such that we have 6 carbon $\ce{sp^2}$ bonds (4 $\ce{C-H}$, 2 $\ce{C-C}$) and 1 pi bond based on overlap between the unhybridized p porbital remaining on each carbon. Actually, if we refine this analysis to take into account the known $\ce{H-C-H}$ angle of 117 degrees, we would conclude that the carbon orbitals involved in the $\ce{C-H}$ bonding are $\ce{sp^{2.2}}$ hybridized and the carbon orbitals involved in the $\ce{C-C}$ bond are $\ce{sp^{1.6}}$ hybridized.

I want to point out that, while staying within the MO framework where we only consider the s and p orbitals on carbon, there is an alternate way of describing the hybridization in ethylene - and these two descriptions predict the same physical reality, so they are equivalent descriptions. The texts arbitrarily choose to hybridize only 2 of the carbon p orbitals along with the carbon s orbital. It is just as valid to mix all 3 p orbitals with the s orbital. If we constrain 2 of the resultant orbitals just as we did above (those that will bond to hydrogen) to produce an $\ce{H-C-H}$ angle of 117 degrees, then these two orbitals will be $\ce{sp^{2.2}}$ hybridized, just as the earlier analysis concluded. The remaining two orbitals on carbon, however, can consequently be described as $\ce{sp^{4.3}}$ hybridized. The picture that emerges from this alternate hybridization scheme is one of bent bonds - a 2-membered ring if you will! Something to think about.

The bonding model commonly accepted is neither "right" or "wrong" - it is a model, i.e. an approximation of reality using simple concepts (sort of like describing movement of trains as being linear and at constant speed, and ignoring wobbles, curves, speeding up and slowing down). There is an alternate model, although not popular, that postulates $sp^3$ hybridization only. Try to search for "banana bond theory".

Not the answer you're looking for? Browse other questions tagged hybridization erratum or ask your own question.

40
Why does cyclopropane react with bromine?
3
Molecular orbitals and "generalized" aufbau principle for heteronuclear molecular configurations
1
Reactivity of Alkanes