I know this question has been asked many times but I need to confirm this doubt which has been pestering me for the past few days.

Suppose in an $\mathrm{S_N2}$ reaction (in polar aprotic solvent) we have two nucleophiles:

Now, since we know fluoride $(\ce{F-})$ is stronger nucleophile than iodide $(\ce{I-})$ in polar aprotic solvent, i.e. nucleophilicity parallels basicity. We should expect the alkoxide ion to be more nucleophilic than thiolate since alcohols are weaker acids than thiols.

But my book says the opposite. Is this a exceptional case? If so, could it be predicted in advance that thiolates are better than alkoxide even though fluoride is stronger than iodide?

Any help would be much appreciated.

Please remember that nucleophilic substitution at a saturated carbon atom does not directly correlate with pKa.

The pKa of a substance (in the Bronsted-Lowry definition) relates to the substance's ability to have strong interactions with $\ce{H^+}$. Thus, this interaction is mainly electrostatic in nature; since $\ce{H^+}$ is a very small, weakly polarizable ion, according to hard-soft acid base theory, strong interactions with this ion are largely electrostatic in nature, i.e. proportional to charge density.

However, nucleophilic substitution at a saturated carbon atom occurs mainly through orbital interactions, not through electrostatic interactions. Namely, the highest occupied molecular orbital (HOMO) of the nucleophile interacts with the LUMO (sigma antibonding orbital) of the substrate (usually alkyl halide). 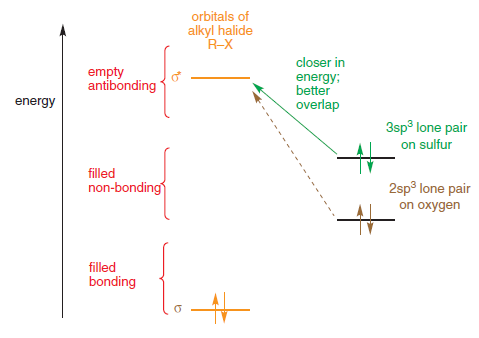 Thus, if you consider the relative energy levels HOMOs in related molecules and ions, you get the general trend below:

To answer this question, we have to consider the several factors that affect nucleophilicity, which is a kinetic concept (i.e. it is related to the activation energy required for the reaction to take place). My answer here has very clearly put out the factors that affect nucleophilicity. Chiefly, they are the thermodynamics of the interaction (think of the bond energies of bonds being formed and broken), orbital interactions (primarily, a kinetic consideration) and of course, there are the usual steric and solvent considerations.

Being a thermodynamic concept, basicity is related to how strong are the bonds being formed between the nucleophile and the substrate carbon atom. It is essentially the thermodynamic factor which I have mentioned above. The generalisation "more basic means more nucleophilic" has been made as it has been observed that basicity is a good measure of nucleophilicity in most cases. However, it is important to note that consideration of basicity neglects other factors I have highlighted, particularly orbital interactions.

Although thiolates fall behind alkoxides on the thermodynamics factor, they win on the kinetics factor and that seems to be the reason for their higher relative nucleophilicity. The more highest occupied MO of the sulfur atom seems to be closer in energy to the lowest unoccupied MO of the substrate. This results in rather favourable orbital interactions. For more information on this, you can take a look at the portion on Klopman-Salem equation here.

Not the answer you're looking for? Browse other questions tagged organic-chemistry reaction-mechanism nucleophilicity or ask your own question.

32
What's the difference between a nucleophile and a base?
28
Explanation for the trends in nucleophilicity—Orbital interactions or electrostatic attraction